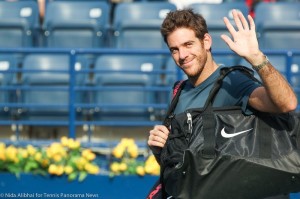 Serving for the match, Del Potro clinched the victory with an ace to defeat the Serb for only his third time in 11 career meetings in two-hours-and-49-minutes – the longest match of the tennis  tournament. The win also ended a 4 match losing streak to Djokovic.

The last Argentine to reach the Indian Wells final, was Guillermo Vilas in 1977.

Del Potro will be playing No. 5 Rafael Nadal in the final on Sunday at Indian Wells. Nadal defeated Tomas Berdych 6-4, 7-4 earlier in the day.

Del Potro credited his third set comeback to the fans. “I think the crowd help me to keep fighting and to come back in the 3rd set,” Del Potro said on court after the match.

“I was doing a very good match until the third set, but Novak had the chance to beat me when I was 3‑Love, Del Potro said later in a post-match news conference.

“But I come back soon, and that give me a little confidence to come back in that set.

“Then also the crowd want to watch more tennis and help me to play my best tennis in the end, and I think it was my best match in this tournament, for sure.”

“His fighting spirit and my lack of concentration,” Djokovic told media were the reasons for the turnaround after leading 3-0 in the final set.  “I just ‑‑ I didn’t deserve to win today.  You know, whenever I had chances, second, third set, I throw them away with some unforced errors.  My movement was poor, and I congratulate to my opponent.”

“I never think about my yesterday match, Del Potro said about his win over Andy Murray in the quarterfinals.  Djokovic is completely different player.  He’s the No. 1 and always is a big challenge against him.

“I was so close to lose because he got the chance to beat me, but I think I got lucky in very important moments, very important points when I made a fantastic winners on my forehands.

“Also good aces, and that’s help me to go through.

Djokovic on Del Potro’s game:”He has a big serve; he moves around the court very well for his height; he uses that forehand as a great weapon, you know.  Great running forehand, so he’s opening that side.

“I didn’t use my backhand along the line as I usually do.  It’s one of my best shots.  Today I just wasn’t there.  My backhand generally wasn’t there.  It’s okay, you know.  It happens.  It’s sport, and I just didn’t make it this time.”

Del Potro’s use of the slice proved to be very effective in this match and in the tournament. “I use it a lot, because that help me to play more aggressive with my forehand and trying to do different things, Del Potro said.  “That help me to beat Murray yesterday; today Nole.

“I don’t know if I’m going to use tomorrow against Rafa because he’s lefty and he move really, really fast in the baseline.

“But what I know about him is playing more aggressive than today, trying to make a few winners with my forehands, coming a lot to the net, and I need to serve well also.” 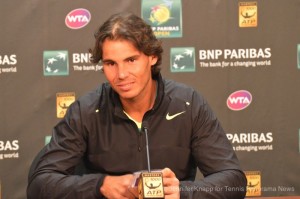 Rafael Nadal beat Tomas Berdych 6-4, 7-5 to gain his fourth berth in the BNP Paribas Open final. Nadal is now 16-1 in his comeback from a left knee injury since taking a seven month hiatus off the tennis tour, including a current 13 match win streak.

“It’s very, very difficult to imagine something like this. But here we are today, and very happy about all what happened the last month, especially last three weeks,” said Nadal, who took out No. 2 Roger Federer in straight sets in the quarterfinals.

“So coming back is certainly something amazing for me, totally unexpected, and I received more support than ever from the crowd every place that I played.  That’s always a very, very special feeling.  Thank you very much, all the people.

“I am enjoying, sure.  Every match means a lot to me.  Every time I am able to come back on court and play these kind of matches makes me very happy.”

“I don’t have nothing to lose after seven months. I did much more than what I dreamed.”

Nadal will be seeking his third Indian Wells title.

“He looks strong again,” Berdych said. “He still play very aggressive, and what he was missing in his first matches when he come back after the injury was maybe a bit of confidence in his game, but definitely not today and not anymore.”

“I was very nervous at the end of the match to close the match and was lucky that my serve worked amazing in the last game in important moments,” Nadal  said. “Victories like today, like the other day, helps you a lot for the confidence and to remember all the things that you have to do in every moment.”

Nadal holds a 7-3 head-to-head record versus the Argentine.

In order for Del Potro to win Sunday’s final, Del Potro explained that everything has to be “perfect.” “ It’s the final against Rafa.  For sure I need to play better and better every day.  All finals are special to play.

“Also when you play the top guys, they are the favorites, but I will try to do my game like just like today and then see if Rafa give me a little chance to win.”