You are here: Home / Contributors / Rafael Nadal and Kei Nishikori Advance to Fourth Round of Indian Wells 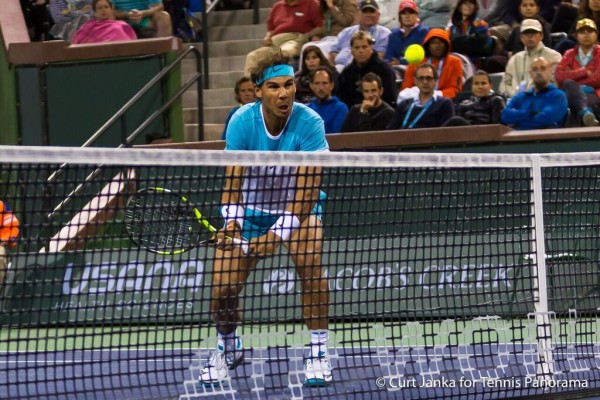 (March 15, 2016) INDIAN WELLS, California – No. 4 seed Rafael Nadal had an easy first set but had to save 5 set points it the second set tiebreak to defeat Spanish countryman and doubles partner Fernando Verdasco 6-0, 7-6(9) in the third round of the BNP Paribas Open.

Verdasco only won 13 points in the first set, making 14 unforced errors. He made a total of 38 errors in the match.

“I lost matches similar to this one in Australia, in Bueno Aires, in Rio de Janeiro, so it’s important winning sets like this for me like the other day in the third, today in the second,” Nadal said in press.

“You know, I have to go through these things, no? I played a great first set, very good quality of tennis, I think. No mistakes. That’s important for me. Serving very well; returning very well.

“I know arriving to a tiebreak against a player like Verdasco normally he serve better than me. You know, normally in these kind of match I have more to lose than him, so he’s able to play very aggressive. He has an amazing shots, no? He arrives to the tiebreak and you know you’re in trouble.

“Feel lucky to win the tiebreak, and at the same time I think at the end of the tiebreak I played well with not many mistakes and going for the points.

“So is an important victory for me. Two matches wins here, tough ones. That’s something that stays in my mind and helps.”

The three-time champion of Indian Wells will face -off against Alexander Zverev for a place in the quarterfinals.

Zverev dismissed 16th seed Gilles Simon easily 6-2, 6-2 on Stadium 3 to reach the fourth round. The up-and-coming 18-year-old German is ranked No. 58th.

“Well, I thought I played really well today,” said the German. “I think I was really aggressive. Hit a lot of winners.

“You know, beating someone like Gilles 6-2, 6-2 is something that gives me a lot of confidence for myself. He’s such a great player and such a tough competitor, as well.

“You know, I was really ready for a long, long fight and a long three-set match and that was that quick.

“You know, I’m really happy that I got through so quickly.”

“I think against someone like Gilles you really have to be aggressive even more than against other players, and that’s, I think, what I did and worked out really well,” Zverev added.

“I had a great day today. You know, someone like Gilles, if you don’t hit him off the court he’s gonna be tough to beat. He’s gonna be running and fighting all day.

Zverev talked about playing Nadal:
“Rafa, he’s one of the greatest in the sport ever winning 14 slams. He’s probably one of greatest fighters ever, so it would be a big honor to play against someone like him.”

Nadal discussed his match-up against the young German: “He’s a clear possible future No. 1. He’s an amazing player. He has all the shots. Very good physical performance. Tall, good serve, first and second, great shots from the baseline, forehand and backhand.

“He has everything to become big star and he’s playing well. He won already matches against Dimitrov, against Simon today. So I don’t know the other matches he won. Against who? Dodig? So three very good matches, no?

“Going to be a very tough match tomorrow for me, and I have to be ready to fight, to suffer, and to try to play aggressive. That’s what I gonna try, no? Try to put a high rhythm and let’s see. I know going to be a very tough match. I happy the way I played today the first set, so if I can keep going the same way tomorrow, I hope to have my chances.” 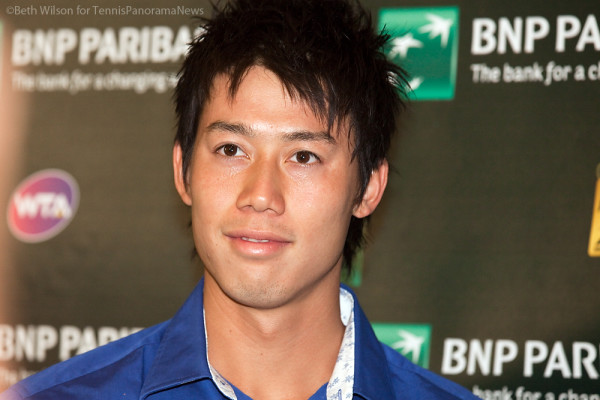 Steve Johnson led 6-2 in the first set tiebreak, before something got into his eye and whatever it was he could not get it out. He proceeded to lose the next six points to lose the set.

Nishikori will take on John Isner next. Isner defeated Adrian Mannarino 6-4, 7-6(3). Nishikori talked about the match-up against the hard-serving American: “The key will be on the return. My return, it’s going to be the key, for sure. I have to return well.

During his match Isner hit 15 aces and did not lose any first serve points.

Isner on playng Nishikori: “Prior to last year I had never played him, which was pretty odd, because we have been in the same tournaments for a very long time.

“Now it seems like that’s starting to correct itself a little bit. This is the third time I’m going to play him in about a year.

“In the Washington final I thought both of us played pretty well. He was obviously better than me. He won it in three sets. We have been pretty evenly matched in our first two contests. We have a rubber match coming up tomorrow. It will be fun.

“This is the third time, all on hard courts, in America, so it’s a good situation for me. But at the same time, going up against someone as at Kei’s level and stature, I will need to play very well to win. He he’s a fantastic player and he’s been doing it for a very long time.”