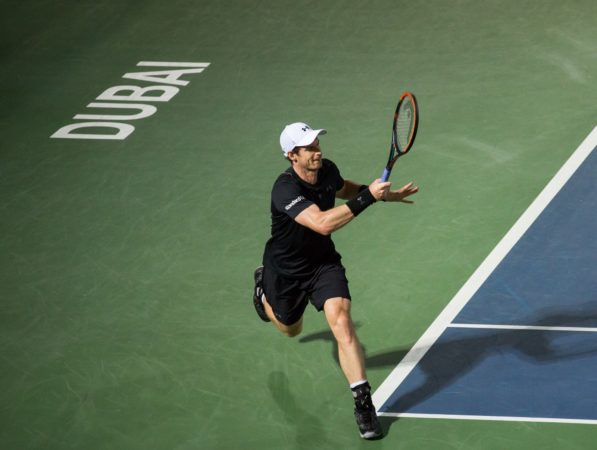 (March 3, 2017) DUBAI, UAE: Andy Murray will face Fernando Verdasco in the final of the Dubai Duty Free Tennis Championships, after the world No. 1 beat seventh seed Lucas Pouille 7-5, 6-1, and in a match between two unseeded players, Fernando Verdasco defeated Robin Haase 7-6 (5), 5-7, 6-1. Murray has won 12 of his 13 matches against Verdasco, with their most recent meeting coming in Paris at the end of last season.

“I don’t think it was the best match” said Murray, who will be contesting his second final in three tournaments this year after finishing as runner-up in Doha. “A lot of mistakes. You know, there was some good stuff in there, I think, middle and towards the end of the first set. But neither of us served well at the beginning. He didn’t make hardly any first serves his first few service games, and I was struggling a bit there too.

“I think potentially matches yesterday had something to do with that, because I think sometimes, you know, if your legs are a little bit tired that the serve is one of the first things that goes. As the match went on, I started serving a bit better and that helped me. Yeah, the first set was very important to win after how the matches went yesterday.”

In the deciding set of the second semifinal, Verdasco took a commanding 4-1 lead. Although Haase held two break points in the sixth game Verdasco  went on to break serve yet again to claim a place in the final.

“After that second set, I start thinking to hit the ball a little bit more, going through the ball instead of going back, try to be more aggressive,” said Verdasco. “He was serving really good, I think, the whole match. Great directions, around 190 to 200 all the time, and it was not easy. Even the second serve, it was with a lot of spin and tough to go through the ball and put a good return. So it was a really tough match. Needed to be there, of course, till the last point, and I think that game of course with 4-1 coming back with my serve, recovering that break points, gave me a push of confidence and energy.”

Haase admitted that Verdasco came out firing in the third set and there wasn’t much he could do.

“He has a toilet break (after the second set), he comes back, and he hit some rockets with new balls. Even on my serve he just went for it. I think I lose the first five, six points without having a chance,” said Haase. “So credit for him. Great job. I tried. I kept fighting. I have chances to even break back to go to 4-2, but he was just too good at the end. It’s been a very good week, but I could have won today. So now I’m really, really, really disappointed.”

Jean-Julien Rojer and Horia Tecau upset top seeds Henri Kontinen and John Peers 7-6 (8), 6-3 and will play Rohan Bopanna and Marcin Matkowski in the doubles final. It was the first loss for Kontinen and Peers since October 31st, since when they won Paris, the ATP World Tour Finals and the Australian Open