Vandeweghe, Goerges and Pavlyuchenkova score day one wins in Zhuhai 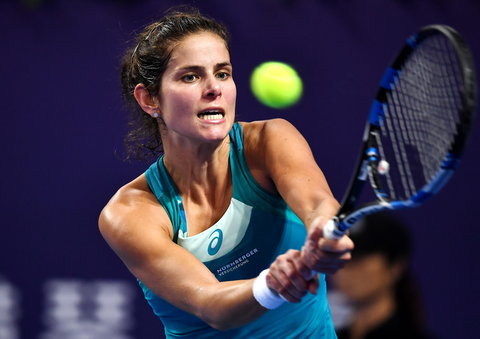 Goerges and Pavlyuchenkova kept up the late season form that has seen them both win WTA titles in recent weeks. Goerges, who sealed her place in Zhuhai by winning the Kremlin Cup in the last week of the regular season, proved too strong for Magadalena Rybarikova to win 6-1, 7-6 in the Azalea Group on Tuesday.

“I actually had booked my vacations already, which I had to cancel,” Goerges explained. “Well, I was just very glad that I could be able to play this tennis in Moscow, and, yeah, really give me the opportunity to be here and I just enjoy every moment here because it’s a bonus.

“I appreciate being here. It’s a lovely event, and I think that’s what you play for at the end of the year, either Singapore or you play for here. To be able to compete here and just leave everything what you have left in your tank, it’s a bonus for me. I’m just very happy about that.”

Pavlyuchenkova, who was victorious in Hong Kong earlier this month, out-battled former World No.1 Angelique Kerber 6-3, 3-6, 6-2 in the Rose Group.

“I am so, so happy because I knew it would be a really tough match,” noted the Russian. “This tournament is extremely tough because it’s elite here so it can never be easy. For me I said before the tournament that I wanted to win as many matches as I can; I want to do well.

“I find it better to play two in a row because sometimes it’s difficult to start and get used to the conditions. Ashleigh is a completely different player, which makes it more difficult more me. I’ll just try to do my best and try to win.”

“I think I was not playing good in the first set,” said Kerber. “I start to play my game actually in the second set, and then, yeah, I think at the end she won the deciding points, and I think that was the key for the match. I was trying to fight until the last point, but yeah, at the end I was not playing my tennis. I think I do too many mistakes in the important moments.”

Vandeweghe opened the tournament against China’s Shuai Peng and was made to work hard by Peng, a fan favourite who was awarded a wildcard into the season-ending showcase. Vandeweghe eventually prevailed 3-6, 6-3, 6-2 to take an early lead in the Bougainvillea Group.

“Today was a survive-and-conquer kind of day,” said the American. “I really was playing not so well, very below average for the standard that I’m used to playing and competing at. I think it was, you know, just a matter of, you know, focusing on the next point at hand and just moving forward. I mean, it’s a tough part of the year and it’s a tough event.”

Wednesday sees Pavlyuchenkova back in action as she takes on talented young Australian Ashleigh Barty, who makes her debut in the Rose Group. US Open champion Sloane Stephens has a tough opening match in prospect against Anastasija Sevastova in the Camellia Group. Top seed Kristina Mladenovic will play her first match of the tournament when she takes on Rybarikova in the Azalea Group.