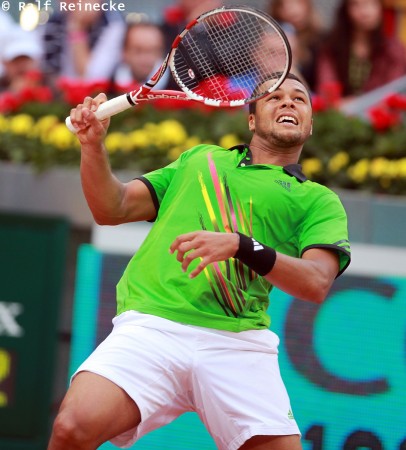 Juan Martin Del Potro had a scare on Tuesday. He had to overcome a leg injury in the second set and Russia’s Mikhail Youzhny to win 6-1, 3-6, 6-3 at the Madrid Open. The Argentine said that he might not be physically ready for his round two clash with Marin Cilic “I will check with the doctor if it’s safe to play,” said Del Potro who said that he began to feel the pain in his semifinal match at the Estoril Open this past weekend.Â  “I will be careful for my future – I am playing really well last week and this, but my first goal is to play healthyâ€¦.I want to be safe this week so I don’t want to risk my presentation in French Open.”

Jo Wilfred Tsonga had no trouble with qualifier Pere Riba 6-4, 6-2.

Top seeded Caroline Wozniacki battled through to a 6-4 6-4 win over Serbia’s Bojana Jovanovski . Wozniacki commented on her twitter account â€œ”Not the best game but happy to get through and always difficult to play against a young upcoming player.”

Samantha Stosur struggled to get past Daniela Hantuchova 7-6 (7/1), 7-5 to advance to the second round.Â  Stosur said, “We always have tough matches,” Stosur said after claiming victory with 24 winners and 28 unforced errors. “We know each other’s game very wellâ€¦.it was a tough match and I’m glad to get through. I was ready to play a third set if it had gone to that. I just tried to stay in the moment and play each point as it came.”

Upsets on the day

Feliciano Lopez stunned Milos Raonic 4-6, 7-6(2), 6-4 to advance to the second round to face third sees Roger Federer on Wednesday. Lopez commented on the match-up, “I play tennis and train everyday to play matches like the one tomorrow and against the players like the ones here, the best player in history, itâ€™s really a pleasure…..I’m in a very good moment and I’ve had a very good season on clay and what matters most is the moment because there are incredible moments in everyone’s career and youâ€™ve got to play against Federer and try to face him. I’ll try to play as well as I did today and if I do I will have many opportunities.”

Juan Monaco defeated No. 9 Gael Monfils when the Frenchman was forced to retire due to illness with Mondaco leading 6-2, 3-0.