You are here: Home / Features / Madrid: Nadal Wins with a Heavy Heart, Djokovic Tested Streak at 31 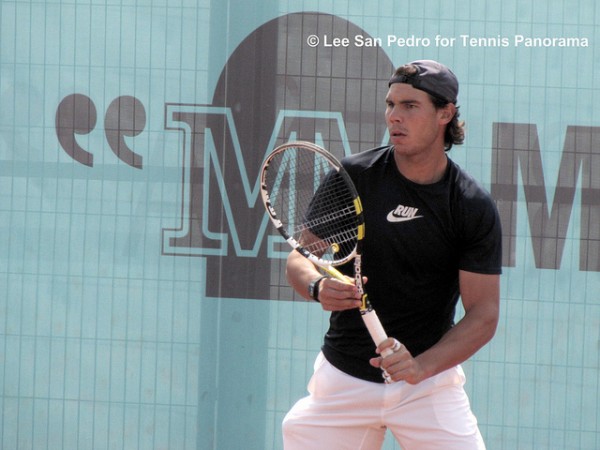 There was more than a match on his mind when Rafael Nadal took to the court on Saturday at the Madrid Open. Rafael Nadal had to overcome more than Roger Federer on court. Nadal was visibly emotionally distressed at the death of golfer Spanish golfer Seve Ballesteros during an on-court tribute.

In part 24 of the Nadal-Federer rivalry, the Spaniard extended his record over the Swiss to 16-8 with a 5-7, 6-1, 6-3 victory to reach his third consecutive Madrid Open final.

â€œThis win is much too small to dedicate to Seveâ€”heâ€™s one of the greatest players in the history of our sport.â€

â€œPlaying Federer always provides a special satisfaction as we have played so many important matches,â€ said Nadal.

Nadal will meet Novak Djokovic in the final on Sunday and try to win his first title against the Serb in three tries.

Different streaks will be in play in Sundayâ€™s final. Nadalâ€™s current clay court win streak at 37, Nadalâ€™s winning streak against Djokovic on clay at 9-0 and Djokovicâ€™s perfect start to the 2011 season currently at 31.

Azarenka: “I came very motivated to play this match and show my best tennis â€¦I had to be the one dominating the game and not her, because she has really big shots and when she goes for it it’s tough to see where she’s hitting.”

Both finalists will be moving up on the rankings â€“ Azarenka will move up to No. 4 in the world. Kvitova will enter the top ten.

Kvitova: â€œYesterday I knew if I won I’d be in the Top 10. It’s good but it’s only a number and I still want to get better and betterâ€¦when I was young, I was inspired by Martina Navratilova. She was Czech, played very offensive tennis and had