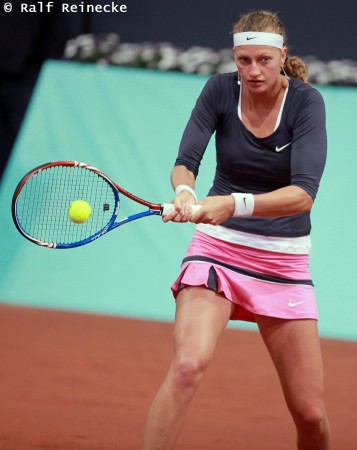 Petra Kvitova won her fourth WTA singles title of her career, her first Premier-level title and her third title of the 2011 season by defeating fourth-seeded Victoria Azarenka 7-6(3), 6-4 to claim the Madrid Open.

Kvitovaâ€™s week will vault the Czech into the top ten in WTA rankings on Monday. Â Azarenka will move up to No. 4 in the world, making her the highest-ranked Belarusian in WTA history.

Kvitova:â€œWe know each other so it was going to be tough to find the key, but I think it was who will play faster, who will be the more aggressive. And I was the first! Itâ€™s nice to win the tournament and to be in the Top 10 at the same time. But itâ€™s just a number. I want to improve my game and weâ€™ll see – I donâ€™t want to be only No.10!â€
Kvitova Â becomes the sixth Czech woman to rank inside the top ten since computerized rankings were introduced in 1975, after Martina Navratilova, Hana Mandlikova, Helena Sukova, Jana Novotna and Nicole Vaidisova.

The weekend was not all bad for Azarenka. She paired up with Maria Kirilenko to take their second WTA doubles title together.