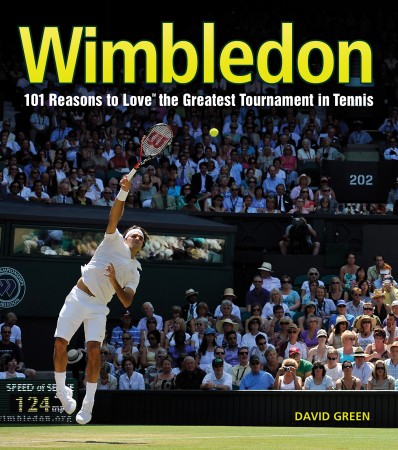 For more than a century, tennisâ€™s most legendary players have gracefully volleyed their way to glory on the hollowed grounds of the All England Club. But it is also on this same turf that some of the gameâ€™s finest have faltered, often because they were unable to master the very thing that gave lawn tennis itâ€™s nameâ€”the grass. The only Grand Slam tournament still played on the grass, Wimbledon has become as much of a showcase of British culture and tradition as it has an elite sporting event.Â Wimbledon: 101 Reasons to Love Tennisâ€™s Greatest Tournament (Abrams 2011) celebrates the athletes, the matches, the history, and the rituals that have come to define this prestigious competition.

Author David Green answered a few questions about his latest work set to hit the shelves on June 1, 2011:

Tennis Panorama News: What inspired you to write the book?

David Green: We were looking for opportunities to expand the 101 Reasons to LoveTM series and thought Wimbledon would be a perfect fit. Itâ€™s among the most prestigious sporting events in the world. In addition to the spectacle of Wimbledon itself, the Olympics are coming to London in 2012 and the tennis events will be played at the All England Club.

On a personal note, watching Wimbledon on television as a child was my first exposure to tennis and inspired me to take up the game. I wanted to be Bjorn Borg.

TPN: How long did it take you to do the research?

DG: I spent several months researching the book, reading pretty much everything I could get my hands on and getting input from other tennis buffs and experts. Fortunately, I had plenty of lead time to complete my research before starting on the manuscript.

TPN: What was the toughest part of the research?

DG: Thereâ€™s so much history, it was actually quite difficult to cull it down to 101 reasons. Finding quality photographs from those early days was also challenging, but our resources really came through. I think the photography in the book is spectacular and a big part of what makes these books so special.

TPN: What makes Wimbledon more special than the other majors?

DG: So many things, but first and foremost, its history and tradition. Wimbledon is the original tennis championship and the only major still played on grass. Itâ€™s the tournament everyone wants to win. And then there are all the rituals and pageantry that surround the tournament â€“ the royal patronage, the white tennis garb, strawberries and cream, champagneâ€¦ and rain. Thereâ€™s almost always rain. Itâ€™s all very romantic. Thatâ€™s unique for a major sporting event.

TPN: Name a few things that first time visitors should not miss while on the grounds?

DG: Ideally, a seat at Centre Court is everyoneâ€™s first choice, but those may be a bit difficult to come by. For me, just being able to walk through the gates and wander the grounds, hearing the cheers and groans, is wonderful. Watch a match on one of the secondary courts featuring some of the younger, lesser-known players. Who knows, one of them may become a superstar down the road.

If you donâ€™t have tickets, or even if you do, spend a little time in Aorangi Park watching a match on the big screen. Sample from the myriad refreshments. If thereâ€™s time, visit the museum. Itâ€™s terrific.

TPN: What is your next book project?

DG: Weâ€™re hoping to start developing a series of football books. Thereâ€™s enormous interest in the sport, obviously, and we see an opportunity to extend our 101 line.

Wimbledon
101 Reasons to Love the Greatest Tournament in Tennis

If you are a tennis history buff, this book is for you. It’s almost like a mini encyclopedia of Wimbledon full of facts, figures and rare pictures, obviously written by a major tennis fan. The book is available for purchase here.

David Green is principal and creative director of Brightgreen Design in Orangeburg, New York. He is the author of seven books in STCâ€™s 101 Reasons to Love series.