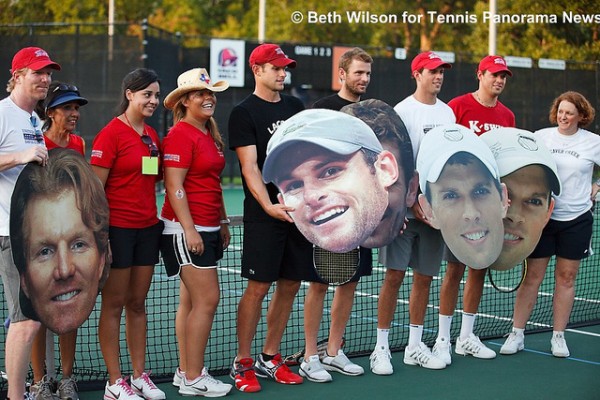 AUSTIN, Texas – The USTA Texas Section hosted a free Tennis Festival on Tuesday, July 5 all part of the public events leading up to the US vs. Spain Davis Cup quarterfinal tie this weekend.Â  The location of the festival, the University of Texas’ Penick-Allison Tennis Center in downtown Austin, is the home of University of Texas Longhorns tennis team. This facility is located close to the Frank Erwin Center the arena where the Davis Cup matches will be held.

Hundreds of kids and parents came out despite temperatures over 100 degrees to celebrate the game of tennis. Kids young and not so young got their faces painted, participated in drills and played tennis games. Just over an hour into the proceedings, the US Davis Cup team arrived. US Davis Cup team members Andy Roddick, Mardy Fish, Bob and Mike Bryan took to different courts to hit with eager youngsters.

Members of the US Davis Cup squad judged the tennis level of their young opponents and adjusted their shots accordingly to make it fun. Team Captain Jim Courier ended the evening by introducing the team members, coaches and hitting partners and then thanked everyone for their attendance and participation.

Beth Wilson is the founder of NadalNews.com. She has also contributed photos to various tennis sites including TennisConnected.