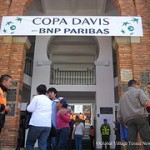 BOGOTA – The United States Davis Cup team is one win away from returning to the World Group, and denying Colombia its first-ever climb to that level.
Captain Patrick McEnroe switched out Ryan Harrison for the more experienced Mardy Fish, who teamed up with John Isner to defeat Colombia’s Robert Farah and Carlos Salamanca 6-4 6-4 6-7 6-3, giving the U.S. a 2-1 lead heading into Sunday’s final day of play at the Plaza de Toros la Santamaria in the Colombian capital.
The Americans broke the Colombians early in the first set and held on to win it. Fish got off to a stronger start with his service game compared with his Friday performance, while Isner bent, but did not get broken by Farah and Salamanca.
The turning point in a victorious second set for the U.S. was an Isner cross-court backhand winner on break point for a 3-2 lead.
The Colombians would not go away quietly. They raced out to a 3-0 lead in the third set, on strong serving by Salamanca and stellar net play by Farah. But the U.S. went on to win the next two games, punctuated by a Farah double fault that put both teams back on serve.
Later in the set, lots of drama surrounding a pair of Fish service games. The U.S. held on despite 3 double faults and a break point in one game, and set points in the other game.
It was only fitting that we finally saw the first tiebreak set of this Davis Cup. Urged on by an extremelyÂ loud hometown crowd in the bullring chanting ” SÃ­ Se Fue!” (“Yes We Can!”), Farah and Salamanca jumped out toÂ a 6-2 lead and went on to win the third set tiebreak 7-5.
Umpire Carlos Bernardes had his hands full trying to silence the crowd, which at numerous times during the set wouldn’t stop shouting while the Americans were serving. Just prior to the beginning of the fourth set, the crowd was warned the Colombian team could face a point penalty if such behavior continued.
But the Americans’ play in the fourth set was enough to quiet the crowd, as they sealed the victory after almost three hours of playing time.
Sunday’s first match features Friday’s two singles match victors: Mardy Fish versus Santiago Giraldo. If Fish clinches theÂ win for the United States, he would become the first American to win three live rubbers in a Davis Cup tie since Pete Sampras propelled the U.S.to a Davis Cup title in 1995 against Russia.
If Giraldo wins and forces a fifth and deciding rubber, the ColombiansÂ will go to battle withÂ Alejandro Falla, who lost to Fish in Friday’s five-setter. The watch is on to see if Patrick McEnroe will go with Sam Querrey – who suffered a Friday defeat at the hands of Giraldo — or Isner.
The Americans would most certainly prefer a dead rubber featuring newcomer Ryan Harrison.
Junior Williams is a long-time journalist and tennis fan. At a moment’s notice he can give you a list of all the Davis Cup match-ups that would give the US home ties. He’s in Bogota reporting for Global Village Tennis News and will tweet using theÂ GVTN twitter account during the weekend.

Photo Bonus- Around the Bull Ring