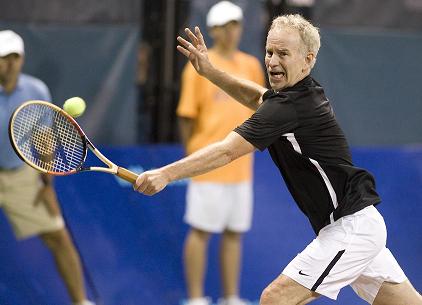 NEW YORK (July 19, 2011) â€“ The John McEnroe Tennis Academy today announced that more than $300,000 was raised from last Thursday nightâ€™s World TeamTennis match between the New York Sportimes, captained by John McEnroe and the Philadelphia Freedoms.Â  The highlight of the night was a singles matchup between legends McEnroe and Bjorn Borg, which McEnroe won 5-4. A sellout crowd attended the night at SPORTIME Randallâ€™s Island, the home of the Academy and the Sportimes.Â  The funds raised will benefit the Johnny Mac Tennis Project, which provides scholarships, coaching, tournament travel and introductory programs for area youth who would not otherwise have the opportunity to attend the Academy or to participate in recreational tennis programs. 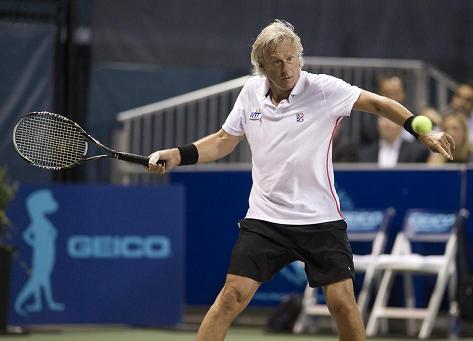 â€œWe are very pleased that the fundraising night in connection with an exciting World TeamTennis match was able to both bring in critical dollars and to show so many people our facility for the first time,â€ Academy Director Mark McEnroe said.Â  â€œThe Academyâ€™s first year of operation has gone very well, and we are confident that these funds will help us increase our reach to many kids who have the interest but not the wherewithal to join our mission of bringing well-rounded, athletic kids from all walks of life into the game of tennis.â€

The Academy approach encourages students to continue their individual schooling during normal school hours and supports kids continuing to participate in other sports.Â  Full and partial scholarship money is available for qualified and promsing young playersÂ  who cannot afford the full tuition. Corporate partners Nike and Dunlop are providing students with equipment and apparel for use both at the Academy and when tournament play begins.Â  Former ATP, Olympic and Israeli Davis Cup player Gilad Bloom is the Academyâ€™s lead pro, supervising a team of over 30 instructors. John McEnroe himself is routinely involved in daily instruction and provides strategic direction for all Academy business. The Academyâ€™s first year of operation exceeded expectations with over 600 local boys and girls enrolled.Â  The second year of Academy training will begin in September.

SPORTIME Randallâ€™s Island, which opened in 2009, is the flagship of Sportimeâ€™s 13 tennis, fitness and sports clubs across New York State, which serve over 25,000 tennis and fitness members and an additional 10,000 junior players. The Randallâ€™s Island facility has 20 indoor/Outdoor Deco-Turf and Har-Tru courts, all enclosed during the indoor season and lighted for evening play.Â  The facility also has a 20,000 square foot clubhouse, a computer/study lounge and a state-of-the-art fitness and training center.

The SPORTIME facility is part of the rebirth of Randallâ€™s Island, located just off the East Side Manhattan below the RFK Bridge.Â  The facilities on the island now include Icahn Stadium, a state-of-the-art track and field facility, nearly 70 baseball, soccer and softball fields, and a renovated Golf Center. The Randallâ€™s Island Sports Foundation manages the Island on behalf of the NYC Department of Parks and Recreation.Â  SPORTIME operates the tennis center pursuant to a 20 year license agreement with the City of New York, Parks and the Randallâ€™s Island Sports Foundation.
For details on the Academy, visit http://www.johnmcenroetennisacademy.com .