You are here: Home / Features / Fish and Isner Reunite in Atlanta Finals 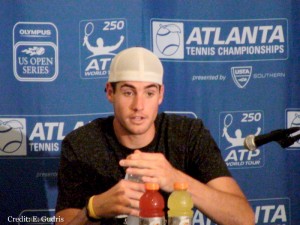 NORCROSS, Georgia – On a blistering afternoon that transitioned into a cooler but muggier evening, John Isner and Mardy Fish fought their way through their semifinal opponents on Saturday to set up a second straight encounter with each other in the finals of the Atlanta Tennis Championships. What makes this return matchup even more intriguing is that both Isner and Fish are playing almost reverse roles in terms of where they were as players a year ago.

Isner faced off against Luxembourgâ€™s Gilles Muller who pushed the tall American to three sets last year in Atlanta. A big serving affair that saw neither man broken in the first two sets, Isner claimed the first set 7-5 when Muller doubled faulted on set point. Isner let a chance to break Muller late in the second set slip away and when it went into the tiebreak, it was Isner who blinked first by dropping his service points allowing Muller to run away with the second set tiebreak. After going off court to change his clothes, Isner appeared more relaxed and on Mullerâ€™s first service game in the third set, Isner hit two big returns that allowed him to break Muller for the first time in the match. Deflated, Muller dropped serve again in the fourth game and that allowed Isner to serve out the match with ease 7-5, 6-7 (3), 6-1.

After his match, Isner talked about his newfound confidence thatâ€™s allowed him to earn a string of victories since claiming the title in Newport a few weeks ago. â€œLike anybody else I play my best when Iâ€™m confident and I move my best when Iâ€™m confident. Iâ€™m not the fastest guy, but Iâ€™ve been moving very well this week and that comes just from having a clear mind out there and making the right decisions. Iâ€™ve been waiting for this feeling for about five months now and now that I have it I donâ€™t want to let it go.â€

The night match featured Fish against rising young American star Ryan Harrison. Although a tight contest was expected, it was Fish who gave Harrison a lesson in all-court offense. Fish returned Harrisonâ€™s big serve with ease and never allowed Harrison a chance to either dictate from the baseline or get much going up at net. After Fish ran away with the first set 6-2, Harrison finally started hitting a few more winners and got his first ace late in the match. But it wasnâ€™t enough to deter Fish in using his all-court game at will as he served out the match in just over an hour 6-2, 6-4.

Fish is 2-1 lifetime against Isner but Isner won their last meeting earlier this spring in Madrid. When Fish was asked later about playing Isner again in the Atlanta final and if he would change anything from last year he said, â€œObviously he showed last year heâ€™s a tough out and no oneâ€™s beaten yet here so heâ€™ll be tough to beat and I hope to have a good plan against him.â€

Probably the most intriguing aspect to Sundayâ€™s final is that last year it was Fish, fresh off winning the title in Newport, who came into Atlanta ranked No. 42 in the world and then used his win in Atlanta as a springboard to not only a successful hard court season but then into this year reaching the top ten for the first time as well as becoming the top ranking U.S. player. The recent improvements in Isnerâ€™s play, including his recent win in Newport, was not lost on Fish when asked about it. â€œYeah it is pretty similar but hopefully the result wonâ€™t be like mine (in Atlanta) last year. Winning breeds winning and itâ€™s contagious and when you win you want to win more. And heâ€™s in a good position. He doesnâ€™t have hardly anything to defend as far as the player that he is. Itâ€™s only upside for him this summer and I hope he does apart from tomorrow.â€

Before the menâ€™s singles final, the menâ€™s doubles final will feature the German team of Matthias Bachinger and Frank Moser versus the team of American Alex Bogomolov Jr. and Australian Matthew Ebden.