You are here: Home / Features / Gulbis and Del Potro Star In Freaky Friday 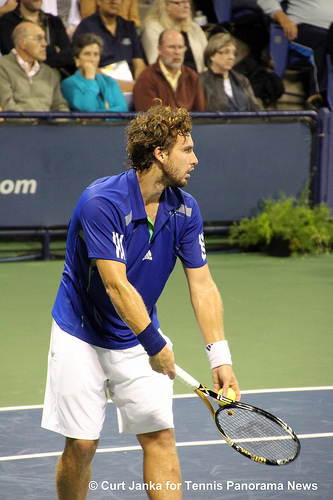 LOSÂ  ANGELES, Caifornia â€“ Ernests Gulbis stuns Juan Martin Del Potro 6-2, 6-4, in another fitting round of role reversal at the Farmers Classic on Friday night. The two have been swapping identities all season. Gulbis, once ranked as high as 21 in the world has had disappointing results all year plummeting his ranking dangerously close to triple digits. In sharp contrast, Del Potro has spent the year watching his ranking rocket up from 484 to 19.

Gulbis has shown tremendous talent but failed to live up to expectations. Del Potroâ€™s return from injury had fans skeptical but he has been far exceeding nearly everyoneâ€™s expectations for his return to the tour.

On Friday, Â both players showed they possess immense talent but it was Del Potro who failed to meet expectations while Gulbis surprised everyone by living up to the hype that used to follow him.

Gulbis played brilliant defense and just enough offense to jump to an early lead. Del Potro only hit a few of the booming forehands that once led him to the U.S. Open title and his first serve never showed much pop. Perhaps sensing Del Potro was not hitting out, Gulbis took to the attack in the second set and it paid off when the opportunity arose to close the match out in two sets. Instead of heavy hitting from Del Potro, it was Gulbis hitting big serves and monster forehands. 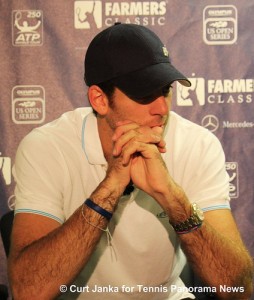 After the match, Del Potro credited his opponent for playing the better match. When asked what would make this yearâ€™s U.S Open a success, he humbly replied, â€œJust being there.â€ While not having to miss the Open for injuries would be an improvement on last year, thatâ€™s not the kind of statement someone makes if they are taking themselves seriously as a contender.

Meanwhile, Gulbis said the win was one of the most important in his career and he exuded positive energy about what this could mean for the rest of the season.

Gulbis will face Alex Bogomolov Jr. in the semifinal.