You are here: Home / Contributors / Fish Withstands Test From Harrison 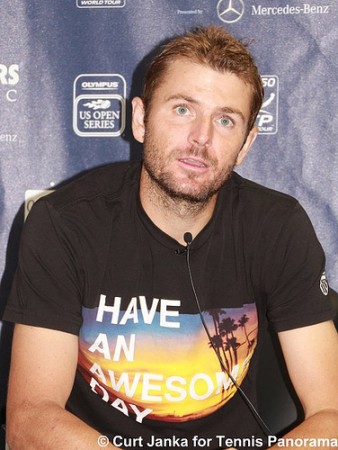 LOS ANGELES, California â€“Â  In an all-American semifinal, Mardy Fish outlasted a determined Ryan Harrison 6-0, 4-6, 7-6(3).Â  What started out as a heavily one-sided affair in Fishâ€™s favor turned into an edge-of-your-seat thriller at the Farmers Classic on Saturday.

Fish began the match beating Harrison with depth more so than pace. With balls landing consistently on or near the baseline, Harrison struggled to find opportunities to lean into his shots. Fish also repeatedly threw in off-speed, high kicking serves to his younger opponentâ€™s backhand with great effect.

Harrison held to open the second set and slowly started to win some of the long rallies. The two continued to hold until, with Harrison up at 5-4, Fish played a few tight points to give Harrison two break points. On the second, Fish bunted a backhand into the net leveling the match at one set all. 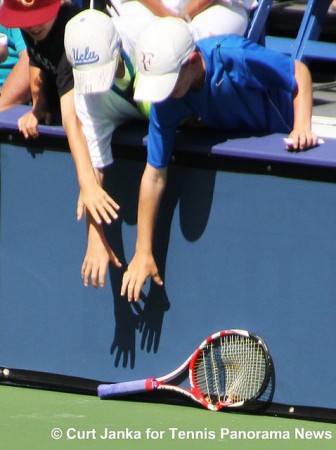 In the third set, both players started with solid holds and then it was Harrison who played a few loose points to give Fish the early break. Harrison responded by breaking his second racquet of the match and was issued a code violation.

With his temper back under control, Harrison started to construct points more carefully. At the same time, Fish seemed unable to continue hitting with the great depth he exhibited in the first two sets. Harrison was able to capitalize and step into more shots and earn the break back.Â  At the end of the third set, Fish was hitting bigger serves and holding comfortably, but Harrison was winning more of the long rallies. 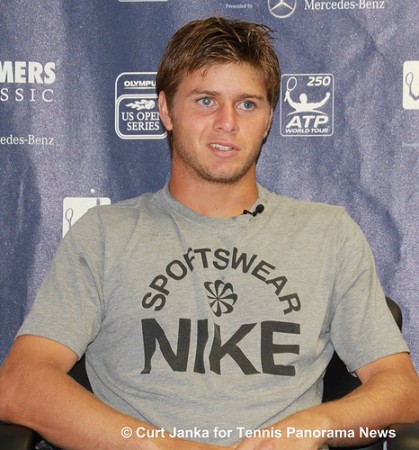 Harrison opened the third set tiebreaker with a double fault and Fish sprinted to a 5-0 lead. Harrison was able to earn one of the mini breaks back but ultimately it was the relaxed composure of Fish that got him to match point, which he clinched with an ace up the middle.

After the match both players commented on the slow, high-bounce play of the courts here and the previous tournament in comparison to the speedy courts theyâ€™ll play on at the U.S. Open. When asked why todayâ€™s match was so much closer their meeting last week in Atlanta, Fish credited Harrison for making fewer errors here in Los Angeles. Harrison believed the difference was his increased aggression. In either case, both players walk away from this match positively.

Fish will play in his second consecutive final on Sunday, putting him squarely in the lead of the Olympus U.S. Open Series Bonus Challenge standings.