You are here: Home / Contributors / Gulbis Avoids a Late Night, Into First Final of 2011 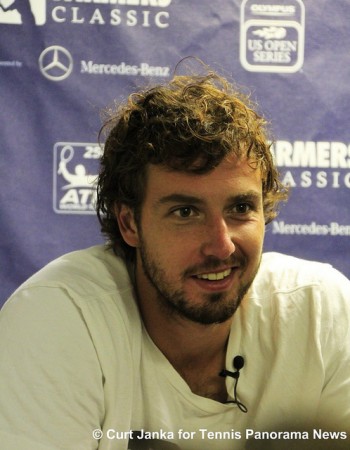 LOS ANGELES, California â€“ Ernests Gulbis came from behind in the second set tie breaker to avoid playing a third set against Alex Bogomolov Jr. Winning the semifinal 6-2, 7-6(4) earned Gulbis his first final of the year.

Bogomolov played more aggressively than he had in his previous match, running around backhands to hit inside out forehands. But that left him vulnerable to up-the-line backhands from Gulbis which the Latvian pounded repeatedly.

Gulbis came to the match prepared for long rallies with Bogomolov and patiently waited for the right shots to attack. The second set was more competitive than the first, with neither player conceding a break.

Gulbis banged an ace on his first match point to win in straights and get home in time for Saturday Night Live.

When Gulbis plays Mardy Fish in the final on Sunday it will be the first time the two have played.