You are here: Home / Features / “On The Call” with Roger Federer 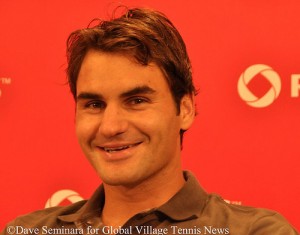 The USTA held a second of a series of conference calls with players who will take part inÂ the Olympus US Open Series tournaments. Roger Federer fielded questions from the media on Wednesday.Â  His first US Open Series tournament this summer will be the Rogers Cup in Montreal. Here are a few excerpts from the conference call in which he talks about his goals, turning thirty, addressing an alleged quote by Ryan Harrison and movingÂ  forward in his career.

On Cincinnati becoming a combined event and how the atmosphere will change:

Sure, I think combined events make it maybe a touch more stressful for everyone trying to get practice courts. That’s a moment of peace and calm before a match. But we’re kind of used to it on the tour with the big tournaments and combined events anyway.

On his upcoming 30th birthday:

This time it’s even a bigger one sort of because it’s a round number. But I always like enjoying my birthday I don’t want to say in public, but at a tournament maybe around that time. So for me it’s not something completely different or new.

I’m looking forward to turning 30. Excited to see how the Canadians are going to celebrate my birthday this time around. Sometimes they start singing ‘Happy Birthday’ during a match. I’m not going to play on Monday, but you never know ifÂ  they’re going to do something crazy another day.

On if he draws satisfaction that winning a grand slam at 30 can be done since Rod Laver won it at 30.

RF: Well, yes. I mean, it’s nice to talk about something more positive than that than saying after a certain time or when you have kids you can’t win anymore like many people tend to say or talk.

But I think I don’t want to say I’m a special case, but I’ve won so much you feel like if you put yourself in the right position, you do all the right things, you’ll definitely get a shot again of winning any big tournaments, or any tournament really for that matter.

I always said, inspiration for guys that play for a very long time, like Andre Agassi, Jimmy Connors, Ken Rosewall, Rod Laver, it’s very inspiring to see what they’ve been able to do for a very long time. My planning is always in the long-term, as you know. That’s why, yeah, I’m looking forward to see how much I can achieve from this point forward, for sure.

On Ryan Harrisonâ€™s comments â€œthat Federer plays anyone else than Rafa or Djokovic, he plays with this swagger, where, â€˜It’s my match, I’m going to win it.â€™ But he thinks it’s more uncertain when you go out and play Djokovic and Nadal.â€

RF: I haven’t heard about it. I didn’t read the piece. The only reason why I kind of heard about it was because Ryan wrote an apology to my manager to me saying he was misquoted. I like Ryan as a guy, as a player, as a kid. Everything gets blown out of proportion. I think that’s his opinion.

At the end of the day it doesn’t matter much to me because I know what I need to do to beat those guys. He didn’t even need to write me a letter, but he did. So that was very nice of him.

RF: Well, I think first of all it’s important to stay healthy and see how long the body allows me to play because the mind is there. I love my traveling. I have no problem. That’s a good thing.

I still think, because I’ve been so fortunate to be so successful, you just want to get back to those winning ways, get those feelings as many times as possible, trying to win all those tournaments that mean a lot to you, it almost doesn’t matter which one it is. I’ll probably be picking the tournaments I like to play the most at this point because I’ve achieved so much. That’s a very nice situation to be in.

It’s important that I work hard, I practice well, I do all the right things. Olympics is obviously part of that. We’ll see how things go in the next years.

On the attention he will give to Davis Cup

RF: Yeah, also same thing. I just played a Davis Cup tie in Bern now. I go tie by tie at this point. I’m looking forward to seeing how I’m going to fit it in the schedule or not. That’s still up in the air. I haven’t decided about Australia yet. I hope I can do that in the next week or so and then go from there really.

On dealing with being chased sitting on top of the rankings,Â  to now being behind two other men

I think that’s a good thing. If someone wants to become world No. 1, 2, even 3 or 4 for that matter, you have to do something really good. Either you’re extremely consistent or extremely successful at the highest of level. You have to win a massive amount of tournaments. I’m at peace with myself because of it.

There’s nothing else I can do. I had my chances to do well or not. From that standpoint, I’m very laid back about the situation.

Sure, I’d love to be world No. 1 and not No. 3. I still think No. 3 is a good ranking. It’s not number I don’t know what. I’m at peace with that. Do I approach the tournaments differently? Well, maybe a little bit obviously. I think when you win 90, 95% of your matches you go into a tournament slightly more confident. Other than that, there’s not a huge change because I know my abilities. I don’t want to say I’m overconfident, but Ialso know what I can do and I also know, how do you say, my limits. Hopeful that allows me to play the best tennis I can each day.

Throughout the summer, the Series will feature nearly 200 live television hours on ESPN2, Tennis Channel and CBS Sports, highlighted by back-to-back menâ€™s and womenâ€™s finals on Sundays on ESPN2 and select finals on CBS Sports.

Tennis Panorama News participates in many tennis media conference calls. â€œOn The Callâ€ serves to give readers an inside view of tennis news.