You are here: Home / Contributors / Radwanska Comes Back From a First Set Bagel to Win in Carlsbad 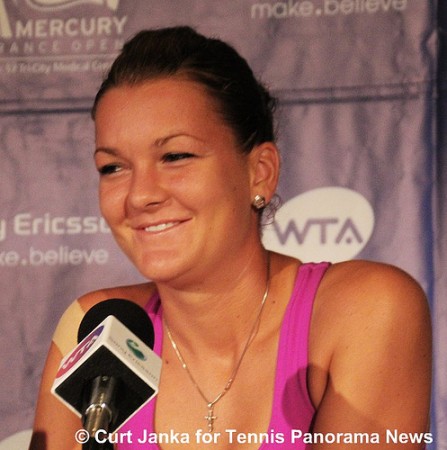 CARLSBAD, California â€“ Starting the match with her right shoulder lightly taped and finishing with it heavily strapped, Agnieszka Radwanska came from behind to beat Daniela Hantuchova 0-6, 6-4, 6-4 at the Mercury Insurance Open. The match started with the doubles partners hitting tentatively at each other, but it was Hantuchova of the Slovak Republic who began to swing freely as she ran away with the first set. The final two sets were more competitive as Polandâ€™s Radwanska played better defense to draw errors out of her opponent and complete the comeback.

Radwanska said her shoulder injury is a recent development, since Stanford, but is no stranger to injuries. She struggled with an injury at the end of the 2010 season and said, â€œI have a little experience with the pain of injuries. I took a lot of painkillers before the match.â€

Asked whether losing the first set so badly brought the competitive spirit back out of her, Radwanska replied â€œI was playing too good in this tournament to lose so quickly and I think this just pushed me to keep fighting.â€ 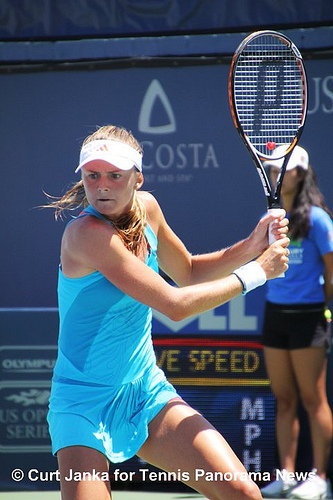 Hantuchova seemed to start mixing in high balls at the start of the second set. Whether it was a tactic to test Radwanskaâ€™s shoulder or not, the change in rhythm worked against Hantuchova. The longer Radwanska could keep in points, the more errors began creeping into Hantuchovaâ€™s game. Radwanska went up a break to lead 3-1 in the second set. The players each held serve one more time before exchanging four consecutive breaks to give Radwanska the second set 6-4.

Despite passive serving from both players, the third set stayed on serve until Hantuchova attacked and broke at 4-3. Radwanska maintained her composure and patience finishing the match without dropping another game.

Asked if sheâ€™ll be able to continue in the tournament, or if the injury will keep her from playing, Radwanska said, â€œYou know, itâ€™s two more matches. Now I think all the top players are there. I have nothing to lose. Itâ€™s 50/50 I think. Itâ€™s hard to say if I can do it or not, but for sure Iâ€™ll try. â€œ

Because Radwanska played the first match on Friday morning, she has a little more time to recover before facing German Andrea Petkovic in the semifinals. Petkovic eased past American Sloane Stephens 6-2, 6-1 in the second quarterfinal of the day.