You are here: Home / Features / With Many Stops and Starts, “Like a Machine,” Monfils Gets Past Isner to Reach Legg Mason Final 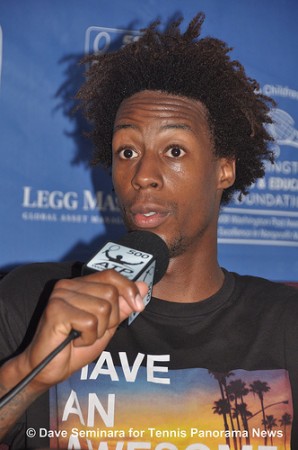 WASHINGTON, DC – On a rainy night in Washington Gael Monfils spent most of the evening watching shark week on the Discovery Channel with his coach, waiting out the rain. The aquatic theme was fitting for a wet night but Monfils showed his own killer instinct when it counted, edging a game John Isner, 6-4, 3-6, 7-6 (8-6) in a match that ended at 1.15 A.M Sunday morning. An exhausted Monfils vowed that, â€œlike a machineâ€ heâ€™d be ready for Radek Stepanek in the final on Sunday, but Stepanek, who finished his match some 7 hours before and pulled out of the doubles, will obviously be the fresher of the two players.

The dramatic match proceeded in fits and starts, with the first rain delay coming just moments into the warm-up, the second coming after just a game, and the third, just when the match started to heat up, with Isner up a break in the second set after losing the first, 6-4.

Both men served huge in the first set, but Isner played a sloppy service game at 4-4, dumping two forehands in the net and another well past the baseline to lose serve. Monfils closed out the set with an easy service game, 6-4, but Isner broke at 1-0 up, and then closed out the second set, 6-3 after a 35 minutes rain delay to force a decisive third set.

Isner played aggressively throughout the match while Monfils seemed content to counter-punch and rely on his serve to win free points. At 4-4 in the third, Isner looked like a boxer trying to stagger to his corner but somehow managed to force a deuce, befor Monfils escaped with a hold to go up 5-4. In the subsequent game, Isner staved off two match points to level the match at 5-5. Monfils challenged a service ace from Isner on the first match point but the video replay of the call was inexplicably unavailable. The crowd was informed that the ball was good but saw no proof. Monfils protested, and Isner eventually approached the net and high fived him, after it was obvious that the call would stand.

Just a bit after 1 A.M. as what remained of the crowd willed the players on with cries of â€œAllez Gaelâ€ and â€œCome on John!â€ the score leveled at 6 and proceeded to a tiebreaker.Â  Both players won their service points and Monfils had to save a match point with a big serve at 5-6 down, but then after a perfect drop shot, lob combo at 6-6, he closed out the breaker 8-6 after Isner dumped a forehand into the net. The two men embraced at the net and the crowd gave the men a well deserved standing ovation some five hours after the men first took the court. The two hour and forty minute match finished some six hours after it was supposed to start. 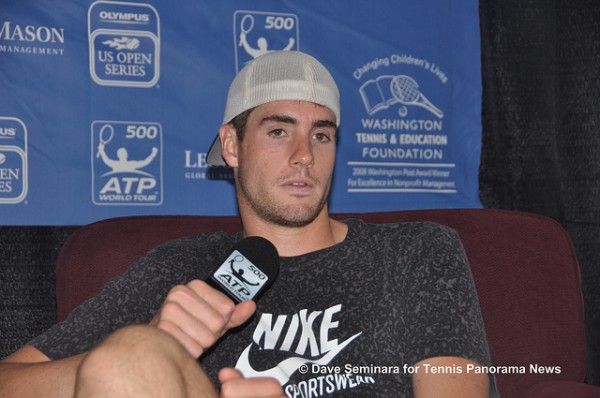 Isner looked exhausted after the match.

He said if he had won heâ€™d be ready to play the final on Sunday, and assumed Monfils would be too.

â€œTomorrow will be a tough match because Radek can come back strong,â€ said Monfils, who wore a Have an Awesome Day t-shirt after the match and seemed his usual carefree self. â€œI had a tough match against him in Hamburg two weeks ago, so I know heâ€™s playing good. I will come back eat, be in my bed around 4 oâ€™clock and then wake up and like a machine, when itâ€™s the final you just forget the bad things, you think itâ€™s the final and you leave everything.â€