You are here: Home / Contributors / A Peek Into WTA All-Access Hour in Toronto 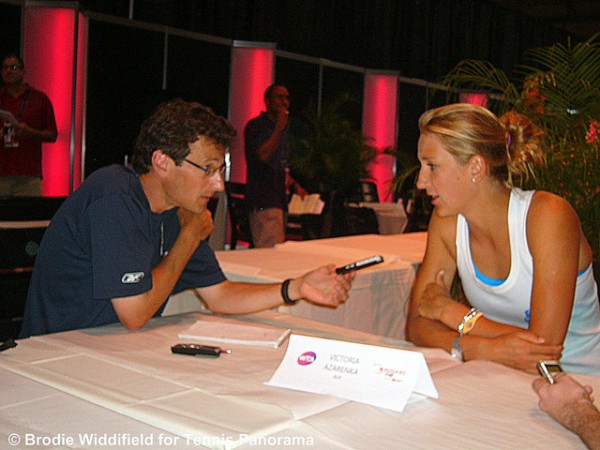 TORONTO, Canada – The WTA held All-Access Hour at the Rexall Centre on Monday with the Top 8 womenâ€™s seeds for Â Rogers Cup.

Kim Clijsters said that she is â€œexcitedâ€ to make her return to tennis at the Rogers Cup. She admitted that she â€œshouldn’t have playedâ€ the French Open, but said â€œI gave it a go and I don’t regret itâ€.

After withdrawing from the San Diego tournament, she said that she is now at 100 percent, noting â€œI’ve been playing tennis at a high level since I was 6 or 7 years oldâ€ and that the â€œbody will feel the side effectsâ€.

She hinted that along with feeling well, the end of her career may not be coming too soon. â€œMy last main goal is the Olympics, and then we’ll see from there. It’s too soon to predict anything after that.

A common point of discussion with the players was the eventual retirement of the Williams sisters. Those who were asked were adamant that it was a thought far from their minds. â€œI’m not thinking of them retiring because I love playing against themâ€, said Victoria Azarenka. Players also insisted that the gap at the top of the game is closing. â€œThe gap is not so big… [the] competition can make for a great tournament. The level is really, really highâ€ said Francesca Schiavone. Azarenka noted that young players continue to improve the level of the game. â€œSo many young players [are] taking the standard so highâ€.