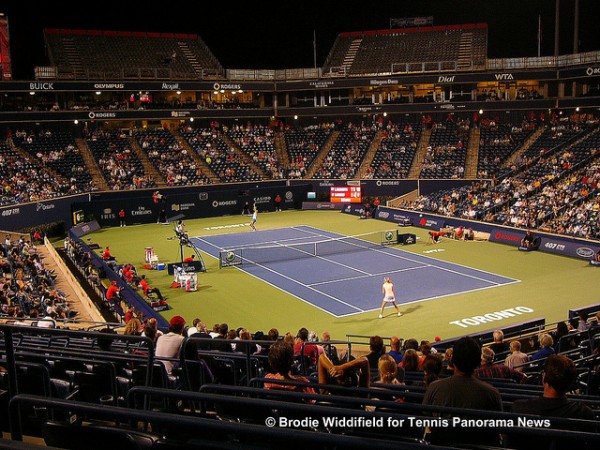 TORONTO, Canada – Main draw action got under way on Monday at the Rogers Cup. It was a day filled with surprises and upsets as seeds Marion Bartoli, Jelena Jankovic, Anastasia Pavlyuchenkova and Svetlana Kuznetsova all fell in the opening matches of their respective campaigns.

Perhaps the most surprising result was Galina Voskoboeva defeating Marion Bartoli 6-3, 6-3. “I think I just played pretty successful this year, and I’m pretty confident right now”, said the Kazakh. It was a different story from the French woman, however, who has had an incredibly successful year, including runs to the French Open semis and Wimbledon quarters. “It was really just one of those days where nothing [was] working.” “When you commit so many mistakes like I did today, it’s really hard to win a match, to be honest. It was really like my game was not at the level I’m supposed to play regarding my ranking.”

Seeded Russian Pavlyuchenkova also fell in the first round, this time on the grandstand to Spaniard Maria Jose Martinez Sanchez 3-6, 6-4, 6-1. Despite taking the first set with her signature powerful ground strokes combined with some excellent passing shots, Martinez Sanchez’s variety and impressive net game managed to overwhelm and frustrate the 14th seed.

In the night session, number 15 seed Jelena Jankovic was also stunned by rising German star Julia Goerges in the first match of the evening session. Goerges’ powerful serve and forehand, along with her excellent movement and defense proved too much for the Serbian. “If you play a player like Jelena, you have to play your best to beat those players. That’s what I knew before. I went for my shots and I went for my game, and, yeah, it went pretty well today.” JankovicÂ admitted to being “rusty” and not match fit. She remained positive, however, citing her past 3 weeks of training, and that practice is never the same as real matches.

The last match of the night featured home town favorite Rebecca Marino up against Ekaterina Makarova of Russia. It was a difficult night for the Canadian, who fought back from being down 0-5 in the first set tiebreak to even it up at 6-6, only to drop the next two points and the set, 7-6(6).

The second set followed a similar pattern. Marino looked excellent on serve, relying on her powerful first serve and driving forehand to stay on the aggressive side of the ball. The return proved much more difficult. Makarova used her lefty serve to her advantage, often kicking it out wide on the ad side of the court, and mixing up her speeds effectively. This kept Marino guessing and often left her behind from the first stroke. “Her serve was actually quite difficult. That second serve, I know it may have looked easy, but it’s difficult, because there was kind of no pace on it. So it’s hard to actually create your own.Â She used the angles very well generally and moved me around a lot. Very smart player, I guess, is the difference.”Â Unable to earn any break points in the match, Marino was broken herself at 4-5 in the second set after saving three match points, losing to Makarova 7-6(6), 6-4.