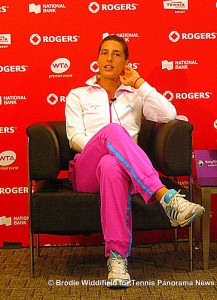 TORONTO, Canada – Grey skies and thunderous rain delayed the start of play in Toronto Tuesday morning, but eventually blue skies prevailed and 17-year-old Canadian junior EugÃ©nie Bouchard made her debut on the centre court of the Rogers Cup. Despite the defeat to charismatic German Andrea Petkovic, 6-2, 6-2, the number six ranked junior had a chance to show off what her game is all about on the big stage. 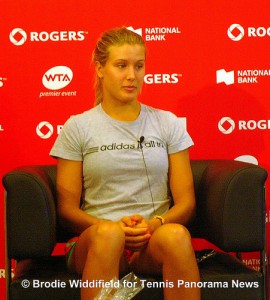 “I always try to play aggressive. That’s my game style. I like to control the point with my serve,” said Bouchard. She also showed off an excellent ability to change directions with the forehand, and a considerable amount of power off the backhand wing.

As for playing in front of the home crowd after such a long wait, the Canadian settled in well. “It was a good experience. I wasn’t nervous at all, actually. There was a rain delay, but I didn’t, you know, get nervous or anything.” “The fans, you know, every point I won they were behind me and it was great. I wish I could, you know, play more at home, but every match that I play here I really appreciate it.”

Petkovic, who cracked the top 10 for the first time on Monday, had nothing but praise for the young junior, as well as American junior Sloane Stephens who she played last week. “I felt with Sloane also and with Eugenie today, I just felt they were courageous out on the court. They had the right attitude.”

Petkovic’s climb up the rankings continues, and she admitted to feeling some of the pressure from her top 10 appearance. “They already told me the week before that I’m gonna be top 10 because Sam [Stosur], she lost some points. “I felt a little pressure in San Diego, I have to say, in Carlsbad, because I didn’t want to go in the top 10, you know, just because somebody handed it to me.”

That competitive hunger and drive to succeed for the highest ranked German is evident through out her attitude, as she has already doubled up on her 2011 goal of making the top 20. She is not stopping there, however, and is looking ahead of her in the race to qualify for the WTA Year End Championships in Istanbul. “That would be a dream come true… I really have to be focused now on each and every tournament trying to play well. It’s gonna be really, really tough, but I’m gonna try my best, try to keep up the intensity and improve, and sooner or later it will come.”