You are here: Home / Contributors / Serena Sails; Clijsters Out with Abdominal Tear in Toronto on Tuesday
Serena Williams of the U.S. serves to Alona Bondarenko of Ukraine during their match at the Rogers Cup women’s tennis tournament in Toronto, August 9, 2011. REUTERS/Mark Blinch (CANADA – Tags: SPORT TENNIS)

TORONTO, Canada – Despite Mother Nature’s best attempt to rain out the second day of main draw action at the Toronto Rogers Cup, all scheduled matches were completed in a flurry of entertaining matches on Tuesday.

Canadian Eugenie Bouchard succumbed to top ranked German Andrea Petkovic to start the day’s action on the centre court. However, both remaining Canadians in the draw came through with impressive wins in straight sets.

Laval, Quebec native Stephanie Dubois defeated German qualifier Kathrin Woerle 7-6(4), 6-1. “It was a tough first set. She was not giving me a lot of rhythm. Her game style is different than most of the girls on the tour.” She put together an impressive first set tiebreak and gained the confidence in the second set to close the match out in straight sets. In the tiebreak I did some shots and I went for my shots and it went well. I got the momentum in the second set, and I served much better in the second.” Dubois, along with fellow Canadian Eugenie Bouchard, enjoyed the opportunity of playing on home soil. “It’s always nice to play in your country. I like the fact that that the crowd was cheering for me, obviously because I’m from Canada. But it always give me good energy, never put pressure on me.”

Next up on the grandstand was fellow Canadian Aleksandra Wozniak, fresh off her championship run at the Odlum Brown Vancouver Open last week, handily defeated Shahar Peer 6-1, 6-0. “It’s always been tough for Canadians to succeed at this Rogers Cup, in Toronto and Montreal. I think it’s awesome that at least two CanadiansÂ  past the second round.” 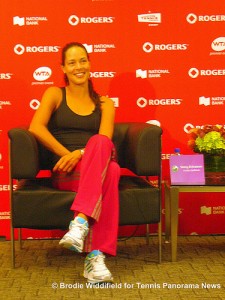 On centre court, Serbian Ana Ivanovic cruised through her opening round match, defeating Shuai Zhang 6-1, 6-1. She credited her new coach Nigel Sears, as well as the patience involved to improve with so many new ideas coming into the fold. â€œNow, coming into a tournament, I really feel like Iâ€™m going to focus on each match and Iâ€™m going to work as hard as I can. And if that day was not good enough, it does not matter. Iâ€™m going to keep working whereas in the past I would take it much more personally and much more emotionally.â€ Ivanovic will play qualifier Iveta Benesova in the second round on Wednesday, and could play top seed and World No. 1 Caroline Wozniacki in the following round.

In the night session, Serena Williams raced to a quick win over Alona Bondarenko 6-0, 6-3 in 46 minutes. Fresh off of her Stanford championship run, she continues to show off her vintage, dominant form winning all 20 of her first service points.

Perhaps the biggest news of the day came in the final match of the night session, where world number 2 Kim Clijsters was forced to withdraw from her first match since the French Open, up 6-3, 1-2 against Jie Zheng due to a left abdominal tear. “During my warm-up today before my match I felt my left stomach muscle really, really tight. I got taped to protect the muscle so I wouldn’t make it worse. During the match it felt like… it’s not working.” “I have a tear in my left stomach muscle, a little bit of blood.”

Beyond that, she said more tests would be needed in conjunction with rehab in order to fix the problem as fast as possible. She could not confirm her US Open status, either. “I still have a few weeks until then so I’ll try to do everything to be ready for the US Open.”