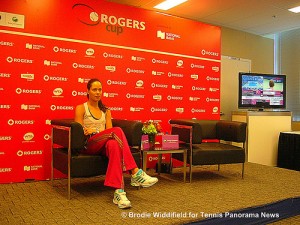 TORONTO, Canada – For the second day in a row rain delayed play in Toronto at the Rogers Cup. However, it was not the only thing that delayed play on Wednesday. A bulb from the lighting fixture on the grandstand (Toronto’s second main court) fell and exploded on the court in between points of the Ana Ivanovic – Iveta Benesova match.

â€œThe glass from one of the lights came down and crashed; it almost hit the ball boy.,” said Ivanovic. “It was just in between points, I was about to serve on my 30-0 service game.â€ 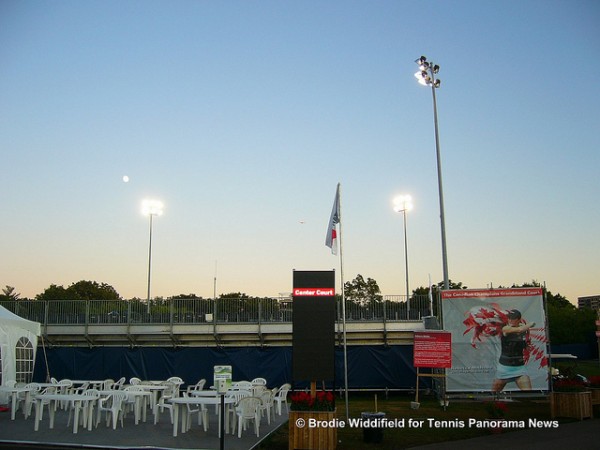 Afterwards, a fan noticed that one of the rings holding in another bulb in the same light fixture appeared to be loose. Chair umpire Carlos Bernardes came out to inspect the situation, and after deeming it too unsafe to play, decided to suspend the match. It was completed on court 1 after Andrea Petkovic defeated Greta Arn.

â€œIt was something,â€ Ivanovic said with a laugh. Indeed, it might have been something that would have caused Ivanovic to lose her cool had it happened a year ago. Not this time. She won the necessary two points needed to win the set after the delay, and cruised to a comfortable 6-3, 6-2 victory.

Starting with coach Nigel Sears and being reunited with trainer Scott Byrnes has helped her find almost immediate success and consistency. Losing in her first match with her new coach at the Bank of the West Classic in Stanford allowed her the necessary practice time to become comfortable with the team. â€œFortunately or unfortunately, I did have a week of practice before San Diego, which kind of did me good. I sort of put some things in place, and it showed on the court. So I was very pleased with that.â€

It showed, and continues to show. Ivanovic made it to the semifinals of the Mercury Insurance Open in Carlsbad, California, losing to Vera Zvonareva in arguably the best match of the week, 5-7, 6-4, 6-4. â€œHaving played a few more matches its obviously nice to have more team wins and it does feel really good. It’s great to see the hard work paying off so soon in one way, but still a lot of hard work to be done.â€

Ivanovic has had similar outstanding runs over the past year, but the results never seemed to stick. â€œIt just feels different this time around because before I had that kind of aggressive game and I was hitting the ball really well. So if I had a few good days in a row and striking the ball well I’d have a great tournament. But it wasn’t a consistent game, and it wasn’t going to get me far week after week.â€

Ivanovic seems to have finally figured out her serve again, and is maintaining a successful approach through controlled aggression. In her opening two matches in Toronto, she has only dropped 6 points off her first serve. When asked about it, she smiled â€œI feel good about it, but wait until I tell my coach about it, he’ll be very pleased,â€ she said with a laugh.

Ivanovic will continue her Rogers Cup campaign on Thursday taking on Italian Roberta Vinci, who upset Wolrd No. 1 Caroline Wozniacki in the second round.