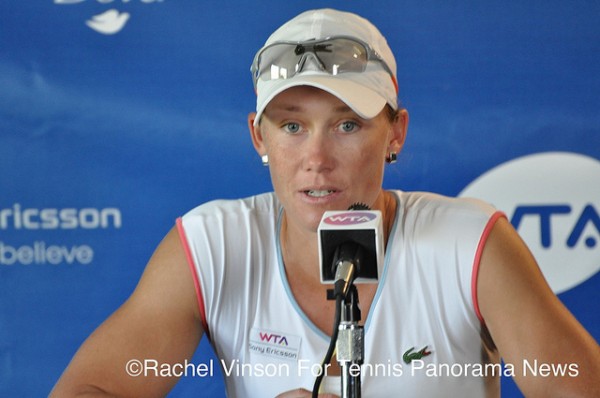 TORONTO, Canada – The first semifinal of the Rogers Cup featured Samantha Stosur and Agnieszka Radwanska. Both players have had fantastic weeks and came in on the back of a series of dominant straight set wins.

It was Stosur who would ride the wave of confidence from her defeat of Roberta Vinci in the quarterfinals, continuing to be untouchable on serve and only dropping two points on her way to taking the set 6-2.

The second set was a very different story. The errors started to creep into Stosur’s game, and Radwanska was able to play more of her creative style as the rallies lengthened. â€œShe definitely started making me play more,â€ said Stosur. â€œI wasn’t able to get on top of the points as quickly. It was a real battle through the second set. She kept me under a lot of pressure.â€

After trading breaks to open the second set and Stosur saved three break points at 3-all, the set seemed headed for a fitting tiebreak. Stosur lost focus after the changeover at 5-6, making three errors and a double fault, and the match was sent to a third and deciding set. â€œI guess that service game, trying to stay into that one that I ended up losing, all that pressure kind of built up and I played a pretty sloppy game and lost the set.â€

In following the same pattern as the Serena Williams/Lucie Safarova semifinal of last night, both players held to 2-2, and then fatigue began to creep into Radwanska’s game and Stosur ran away with the set and the match. â€œIn the third, getting that early break was really comforting for me, and I think then maybe she felt like it was a long way back.â€

For Radwanska, who had won nine straight matches coming into the semifinal, it was tough to keep up the same level of play as the second set. â€œIt’s very hard, you know, playing so many matches in a row, especially good matches on a very high level.â€

Radwanska, who has now played three straight weeks and sported a significant amount of strapping on her shoulder still plans on playing in Cincinnati next week. â€œIt’s just too much tennis. Just I was falling apart now, but, you know, I think I just need few days just to fix it.â€

Stosur, who has enjoyed the time she has spent in the city, is thrilled with the week of success after an up and down year. â€œThese are the big events. When you’ve got a field like what we’ve had here this week with the top 25 playing and the size of the tournament and everything, I think to do well here is fantastic.â€

â€œI think you’re always gonna have those highs and lows through a season most of the time, unless you’re Novak, which it doesn’t seem to bother him at all. I think because it’s so competitive, as well, it’s hard to beat the best every single week. That’s what makes for a great tour,â€ said Stosur.

The Australian is likely in for her toughest match of the tournament yet, as she will take on the winner of Saturday night’s semifinal featuring Serena Williams and Victoria Azarenka.