You are here: Home / Contributors / Serena Williams Wins Toronto, Projected to be Seeded for US Open 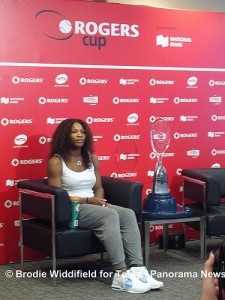 TORONTO, Canada – It has only been four tournaments, but Serena Williams is back to her winning ways.

In a week full of surprises, delays, and drama, Williams was the last woman standing as she defeated Samantha Stosur 6-4, 6-2 to claim her second championship in as many tournaments. The victory was her 39th career WTA title.

â€œEight months ago if there was only one tournament I want to win, it was Toronto. For whatever reason, I really wanted to win this event,â€ said Williams. â€œGoing through so much and being able to win is even more amazing.â€

The match started out an incredibly high level, with both players serving incredibly well. First serves were hitting lines and surpassing 108 mph on a consistent basis as both players avoided break points for the first eight games.

The fifth service game for Stosur was a different matter, however, as she began to feel the pressure, and the errors crept in. She saved the first break point of the match with an excellent slice that handcuffed Williams as she came to the net. Williams managed to get another break point, and would take matters into her own hands with an incredible down the line back hand winner. â€œI definitely think that’s when the match started changing,â€ said Williams. â€œbut for the most part I was really fighting until that point, and obviously after that point I kept fighting. It was definitely a big point.â€ For Stosur, it was a disappointing lapse in concentration. â€œEspecially being up in the game and really holding quite comfortably up until that point, it’s disappointing to lose that,â€ said Stosur. â€œOnce an opponent gets a certain lead, sometimes it really boosts them and makes it a bit more difficult.â€Williams then held easily to take the first set, 6-4.

The pressure continued to bother Stosur. A passive game filled with errors meant that Williams would go up an early break in the second, and it was relatively smooth sailing for Williams. After a loud strike of thunder, she didn’t speed up the match by playing faster, but by serving better. Stosur insisted he didn’t let it bother her. â€œIf you are losing, you kind of hope it does come to stop and get a bit of a break. But I think really you’ve got to just try and ignore it and play each points as normal.â€

In Williams her first three service games of the set, she lost only two points. In the final game, she clocked a first serve coming in at 124 mph. â€œI kept thinking, hit a ace, hit a ace, hit a ace, because I knew at that point I didn’t want to hit too many shots because I felt like I was getting a little tight,â€ said Williams on the last game of the match. With rain threatening at 5-2, she saved the only break point she would face all day to close out the match and win the championship.

For Williams, it was another display of dominance why many consider her one of the best to have ever played the women’s game. Williams has often talked about finding â€œanother levelâ€ this week, particularly after losing the first set to both Jie Zheng and Lucie Safarova, and she did so again today, taking opportunities with conviction and staying out of trouble on serve. She hit nine aces and lost only three points on her first serve, 11 on serve in total.

Though Stosur could not take what would have to be considered the best championship of her career, she remained positive after struggling with bouts of inconsistency this season. â€œI’m full of confidence, really happy with the way my game is at the moment.â€

With the draw for Cincinnati already released, Stosur and Williams could meet again in the second round if the draw holds up. â€œI never really want to change my game too dramatically against any kind of opponent,â€ said Stosur. â€œIt’s maybe trying to execute a bit better and must always go out there and try and play as best you can.â€ Williams praised Stosur’s game and looked forward to the possible match-up. â€œWe’re both playing really intense and really well, and we’ll see how it goes.â€

Serena Williams has to be considered the favorite heading into the final major of the year, the US Open which gets under way in two weeks. She now leads the Olympus US Open Series. â€œI feel like there is a lot of improvements I want to make, you know, being able to close out big points and winning on big points and capitalizing on that,â€ Williams said about her game. â€œStill returning a little better, but overall it’s solid.â€

Next up for Williams is Cincinnati, and then the US Open. â€œRight now physically I feel solid. I feel really good. I’m due to play on Tuesday in Cincinnati, so I’ll be there.â€ Williams insisted that she doesn’t feel like a favorite heading into the final grand slam of the year. â€œI never go in as a favorite. I feel like I’m still the underdog. I’m just taking it one day at a time and one match at a time and just going with it.â€

It is expected that Williams’ ranking on Monday will place her in the top 32 high enough to be seeded at the US Open.

Brodie McPhee is the author of the tennis web site Mind the Racket. He was in TorontoÂ  covering the Rogers Cup WTA edition for Tennis Panorama News