You are here: Home / Contributors / WTA All-Access at the Western and Southern Open 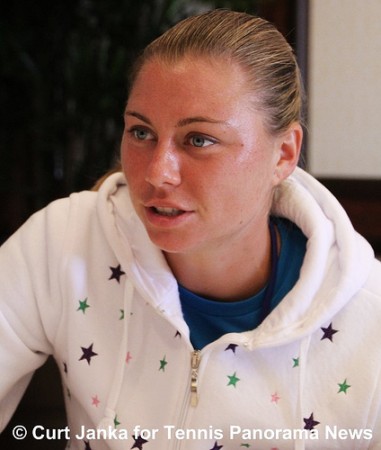 MASON, Ohio – Monday the media was treated to two hours of question and answer sessions with the top eight womenâ€™s seeds at the Western & Southern Open as part of WTA All-Access Hour.

Marion Bartoli appears to be a great health, looks fit and trim and has a nice summer tan.Â  She was dressed in a sporty, casual top and sweats.Â Â  Bartoli was open and relaxed and smiled easily which impressed me for a couple of reasons: she was sitting at a table and was surrounded by 10-12 members of the media staring at her, and she was fairly shy and introverted not that long ago.Â  When complimented by a reporter on her English,Â  Bartoli made a joke about how she listened and studied English from when she was young, and that perhaps some of the other French players who didnâ€™t speak English well just didnâ€™t listen to English that much (as much as her). 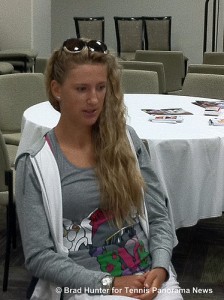 Victoria Azarenka showed up towards the end of Bartoliâ€™s interview, and she slipped in quietly, sat down at another table and started signing autograph postcards.Â  Just before she walked over to the table to speak with the media, she applied her super shiny lip gloss.Â  Azarenkaâ€™s hair was swept to one side, around the front of one shoulder.Â  She was dressed like she might be going shopping on Melrose after, with a graphic tee, bright tennis shoes, and casual Â¾ length pants.Â  The first questions were about her injury, which she answered carefully and like all the gals, she was relaxed thru all questions. Listen to Victoria Azarenka. 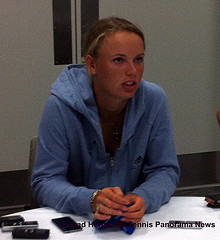 Caroline Wozniacki also entered silently and went straight to the autograph signing table after which, when she was done, she went and sat at a different table.Â Â  She was smiley and completely relaxed during the interview and even handled the potentially embarrassing Rory McIlroy questions without giving away too much info but maintaining her composure.Â  She answered several questions about her game and the growth that her game needs in order to win a Grand Slam, and she didnâ€™t appear overly defensive about the topic.Â  She defended herself and her game but acknowledged that she would continue working.Â  She was dressed in her sporty casuals: a t-shirt type top, maybe a sweatshirt, and Â¾ length sweatpants.Â  This outfit was worn by every woman except Azarenka.Â  Listen to Caroline Wozniaki

One expects Petra Kvitova to be shy, especially after seeing her being interviewed by Martina Navratilova this year during Wimbledon.Â  She was a bit reserved but she seemed much more at ease in this round table interview setting.Â  Â She laughed several times, and tried earnestly to answer every question– at times her honesty made the media folks crack up as well.Â  She says winning Wimbledon didnâ€™t change her as a person.Â  ListenÂ  to Petra Kvitova 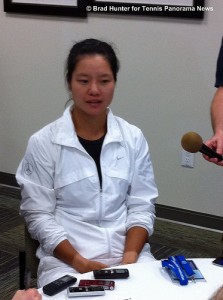 Li Na slipped in right after, and was fun and hilarious and sweet from the first question on.Â Â  She spoke easily and quickly joked about her new found wealth, her spike in popularity, growth of tennis in Asia, and her husband.Â  I also noticed her tan lines where she wears her wrist bands. She answered every question thoughtfully, and seemed to get the most questions of all the players- so much that at some point Schiavone came into the room and started answering questions at another table in a different part of the room.Â  About half of the interviewers exited quickly, but Li Na was not the least bit distracted and stayed focused until the last question asked of her. Listen to Li Na 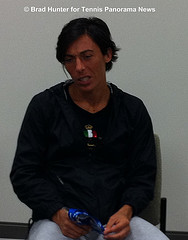 Francesca Schiavone is fun and seems to love tennis, and people, and honesty, and passion, and everything: sheâ€™s mischievous in the â€œfun, slightly wild friendâ€ sort of way and she maintains a languid look in her eyes when she speaks.Â  If I were going all night dancing in Milan, then Schiavone seems like the gal whoâ€™d (a) be up for it and (b) know exactly which places to go and who to see and what to do.Â  She is that 2010 Roland Garros final personified.Â  She joked about not really being very old, made comments about the roles of men and women and challenges for women, and gave her honest appraisal of Americanized Italian food and good places to visit in Italy. Listen to Francesca Schiavone 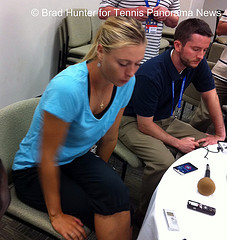 Maria Sharapova peeked her head in towards the end of Schiavoneâ€™s interview, waited a bit outside and then came into the room and sat in the same seat Schiavone had been sitting in.Â  She made a quick joke about everyoneâ€™s devices being charged.Â Â  She told some interesting anecdotes about wanting to be a rhythmic gymnast, and smoothly answered similar questions that all the gals answered about Wozniacki being No. 1 and â€œwas it deserved?â€ (Yes, she deserves it), and â€œare you surprised Serena (Williams) is back so strongly, so quickly?â€Â  (Not surprised, Serena is a great champion).Â  Sharapova speaks in well modulated manner, and being up close with her in this session revealed that she is also goofy and critical of herself. Listen to Maria Sharapova

Vera Zvonareva was the last interview.Â  Zvonareva is a deep thinker: she processes her motivations and emotions, assesses situations in a balanced way, and puts her energy into answering every question with thoughtfulness.Â  She was asked about her thoughts on the combined event and the benefits of this tournament, her favorite doubles partners, and did Wozniacki deserve the No. 1 ranking (Zvonareva says yes, she deserves it). She was the most serious/intense woman who came into the interview room and she smiled when asked about Elena Dementievaâ€™s wedding. Listen to Vera Zvonareva