You are here: Home / Contributors / “All About Serena” 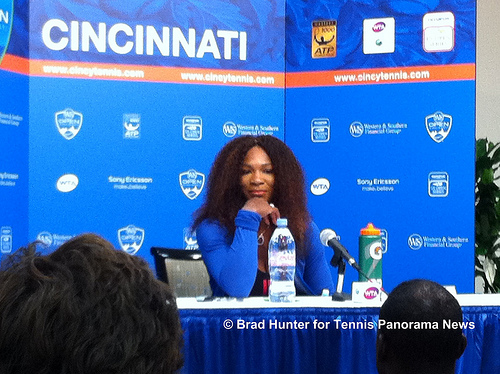 MASON, Ohio – The tournament was in full swing on Tuesday: many of the top players had their first matches, the crowd at the Lindner Family Tennis Center was large and bustling, the yearly heat and humidity returned after the past 2 days of cloud cover and moderate temperatures, and Novak Djokovic and Serena Williams showed up for their first visits to the tournament site.Â  I arrived this morning and went straight to the media center to avail myself to numerous handouts with statistics, match and day preview info and schedules that are available and then I checked for what piece of information I had been anticipating since yesterdayâ€¦ when is Serena getting here/when is she scheduled to practice?Â  The answer: on court 5 at 12:30pm.Â  I wanted to see her for a variety of reasons and also because Williams is not a player that plays a whole bunch of tournaments so any opportunity to see her should be taken.

Would she really show up in Cincy? I walked towards court 5 around Noon and then dawdled around the area.Â  Richard Williams and his wife arrived arm in arm, several minutes before Serena did.Â  The couple entered the practice court, surveyed the layout, grabbed some cold drinks and chit-chatted a bit with the coach of the ladies still hitting on Court 5.Â  Serena and hitting partner Sasha Bajin arrived just a few minutes after 12:30pm, being driven out to court 5 on the back of a golf cart, thru a back entrance pathway not open to the public. She was nibbling what appeared to be a granola bar and her hair was untamed and voluminous.Â  She looked tired because she was moving slowly, and she made her way straight to the court.Â  She hugged her family, and then put her hair pack in a ponytail under a hat and began her practice session with Sasha and another Rafa-type ball striker.Â  Her hitting was steady and powerful as expected, but I noticed something I never would have seen had I not been 15 feet away from her.Â  She holds her head and gaze still in her forehand stroke follow thru as if sheâ€™s looking at something off to the side of the courtâ€”very much like Roger Federer.Â  Itâ€™s dramatic and methodical, and I figure that itâ€™s part of the focus that makes her forehand the weapon of a shot that it is.

How fit is she?Â  Serena looks thinner, leaner, stronger in person than I remember her looking in a long time.Â  She looks like she did back in 2004 and before.Â  She worked with her new trainer and has said that she wanted to get as fit as possible because she has never been as fit as she could possibly be.

How does her ball-striking look compared to the other ladies I have seen so far? (FYI- I have seen Maria Sharapova, Petra Â Kvitova, Caroline Wozniacki, Victoria Azarenka) Serena appears relaxed producing her power and placement.Â  The game looks easy for her, while often times it looks more like â€œworkâ€ for some of her competitors.Â  She more of a Djokovic than she is a Nadal, in her stroke mechanics.

How would she pkay in her match against Hradecka? Serena carried her on-fire form into the match with Hradecka, but she looked labored between points and while changing sides between games.Â  She had a huge double break lead in the second set, but couldnâ€™t close Hradecka out.Â  Hradecka called her coach out while down 2-5, a move I thought was moderately hopeful at best because Serena had been holding serve so easily, but Hradecka proved shrewd in her thinking.Â  She played better tennis after that and eventually had chances to steal the second set away from Serena, but even a fatigued Serena is too much for most players to beat.

How would she handle the media room and what would be the questions that the other journalists intended to ask her? Serena was open and professional in her interview with the media.Â  She made a few jokes, answered her questions thoughtfully, and spoke about her love of Britney Spears with a reporter who asked her about a few different Britney songs.Â  Everyone seemed to have a good time. Serena has been known to be prickly with the media, but there was none of that during this session.Â  She says sheâ€™s more grateful for everything in her life and her tennis career, and I believe she means what she says.