You are here: Home / Contributors / Bloody Friday in Cincinnati 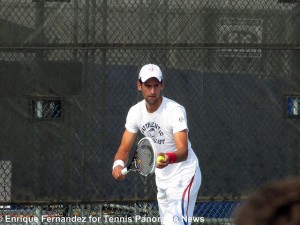 MASON, Ohio – The Western & Southern Open in Cincinnati was on the brink of a nearly unprecedented bloodbath Friday evening when top seed Novak Djokovic found himself down 3-6, 4-4 in his quarterfinal against Gael Monfils. After a mass exodus of the WTAâ€™s top draws on Wednesday, when Serena Williams and Victoria Azarenka withdrew with injuries and Caroline Wozniacki lost, the men almost upstaged them with upsets of the top three seeds in a matter of hours.

The last time Djokovic, Rafael Nadal, and Roger Federer lost on the same day was Aug. 14, 2009, in Montreal. Those defeats also came in a quarterfinal round. In Cincinnati last night, Djokovic struggled for a set and a half against Monfilsâ€™ onslaught of go-for-broke shots and deft volleys. The pair traded breaks in the middle of the second set, and Twitter lit up with assumptions that the Serbian must be exhausted from amassing a record-pace winning streak. But the world number-one figured out a way around the Frenchmanâ€™s game plan just in time, breaking at 4-4 in the second set and serving out the set. With Monfils displaying breathing issues at the start of the third set, Djokovic continued to play more aggressively. After his 3-6, 6-4, 6-3 win, he was asked if he suspected he would be the third upset victim of the day. â€œNo,â€ he said, immediately and emphatically. â€œThe confidence I have this year helps me a lot. This is something that wins matches for me, that right mindset.â€

While Djokovic advanced in an electric, entertaining match under the lightâ€”and in the only quarterfinal among the men and women that went the distanceâ€”number-four seed Andy Murray clinched his semifinal berth quietly by defeating Gilles Simon 6-3, 6-3. 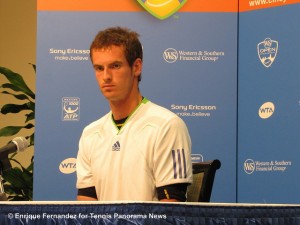 Murrayâ€™s routine result fell in line with his annual low profile at the Western & Southern Open. His match took place earlyâ€”before noonâ€”on Grandstand, the tournamentâ€™s second-largest show court. It was the only menâ€™s quarterfinal not played on Center Court, even though the Brit had yet to play on the main court this week.

To reach Grandstand, Murray took a relatively undignified and unencumbered walk (for a former champ of this event) past fans standing in line for concessions. But the stage was an upgrade for Murray, who played on the brand-new but smaller Court 3 earlier in the week. Murrayâ€™s low billing is a trend in Cincinnati. â€œLast year in the building in Toronto, I played five matches, every one of them in the heat of the day,â€ he said after the match. â€œThen I came here and played my first two matches right in the middle of the day. [Last year] I asked before the quarterfinals, can you please put me on a little bit later? Itâ€™s not fair, because the other guys are playing a lot of matches at night when itâ€™s cooler. This year itâ€™s kind of always the same because of the TV back home.â€ His afternoon matches air live in Great Britain. At least they are night matches somewhere.