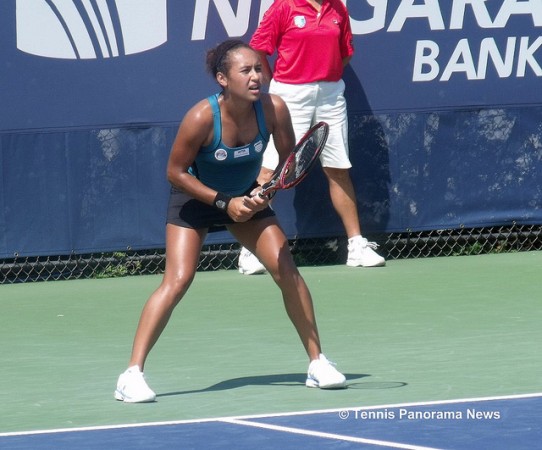 NEW HAVEN, Connecticut – Saturday was an off-day for Great Britainâ€™s Heather Watson. Watson fell in the qualifying of the New Haven Open to Czech Republicâ€™s Petra Cetovska6-1, 6-1. “Yesterday I felt, a bit flat, I wasnâ€™t moving and it just showed a bit more today,” explained Watson.

Despite the loss Watson reflected on her rise in the rankings and a breakthrough year. What has enabled her to move up – â€œgaining more experience and being really determined and really fighting and also I just really enjoy tennis,â€ said Watson. Watson has moved up from 588 in 2009 to 103 in the world as of last week.

Watson is ranked No. 3 among British women. â€œItâ€™s good to have Anne (Anne Keothavong) and Bally (Elena Baltatcha) around to keep pushing me. When I see them do well, I want to do well as well. Weâ€™re all very competitive and thatâ€™s nice.â€

Watson names one of her biggest achievements in her young career as winning the 2009 Girls Championship at US Open. â€œbest day of my life, I was so happy,â€ noted Watson. She also lists winning the gold in the Commonwealth Youth Games for Guernsey and qualifying and winning a round at the French Open. â€œThe week before I had an absolute disaster, I had match points and lost a match and I thought everything is going wrong with my life and then I had a really good week there (French Open).â€

Watson also talked about her experience as a part of the WTA Xperia Hotshots â€“ â€œweâ€™ve gotten to experience so many cool things. Itâ€™s just helped build our fan base and Iâ€™ve had a lot of fun doing.â€

â€œI started very late on the WTA tour. Lots of girls start very young so Iâ€™m just going to keep working hard and be patient I canâ€™t rush anything and hoping that the results take care of themselves.â€

Watson will go back to Florida to train before heading to New York to play in the US Open.

Karen Pestaina is the woman behind Tennis Panorama News. She freelances Â for media outlets in and out of tennis and has worked for many a broadcast news entity. She’s a member of AFTRA, NABET, NABJ, WGA and the US Tennis Writers’Â  Association. She witnessed her first live tennis match as a young child at Forest Hills when Guillermo Vilas upset Jimmy Connors to win the 1977 US Open. This branded her as a Vilas fan for life. She’s covering the New Haven Open this week. Follow her onÂ  the site’s twitter @GVTennisNews.