Currently ranked 105th in the world, the Spaniard Ferrero has missed most to the season with injuries.

The crowd in Louis Armstrong Stadium paid tribute to both players before the final game of the match by giving both players a standing ovation.

Ferrero said, â€œwhen it was 5-4 in the fifth set, I felt very special on the court –I mean, when you saw this crowd enjoying all the time during the match. They love this kind of match, so itâ€™s great.

â€œThis match means a lot for me because it was a long time that I didnâ€™t enjoy myself inside the court.â€

â€œAll the time, my mom says, `You win, you lose, you give your best.â€™ I think today I could sort of smile at my mom even though I lost, so I was happy,â€ said Monfils who was celebrating his 25th birthday on Thursday. 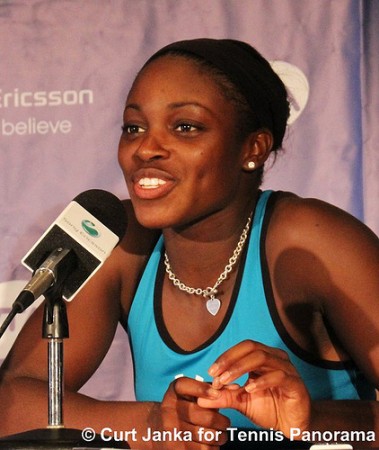 Stephens comes from a sports family, she is the daughter of 1988 NFL Offensive Rookie of the Year John M. Stephens who died in a truck accident two years ago.

â€œChristina (McHale), Irina (Falconi) and myself are all in the third round of the U.S. Open. Weâ€™re ready to go to the top, baby. Whatâ€™s up?,â€ noted Stephens on her other young American contemporaries still in the US Open draw.

Italyâ€™s Francesca Schiavone led the day on center court with a 6-1, 6-1 victory over Mirjana Lucic. â€œ I think really huge stadium,â€ said Schiavone said of Arthur Ashe stadium. Â â€œ Is really big.Â  11:00 is not easy to play here because there are not so many persons.Â  But at the end was better and they could enjoy my tennis, so that’s good satisfaction.â€

Roger Federer improved his career record at Flushing Meadows to 58-6 when he made quick work of 93rd-ranked Dudi Sela of Israel 6-3, 6-2, 6-2. The victory gave the Swiss his 225th career win in a Grand Slam match, second behind Jimmy Connorsâ€™ 233.

â€œI just try to keep enjoying myself and just have fun, whether I win or whether I lose,â€ Williams Â said. â€œItâ€™s a great honor to be playing out here.â€Â  The day session on Ashe Stadium ended earlioer than usual at 4 p.m.