You are here: Home / Contributors / Ferrer Battles Past Lopez to Advance to Shanghai Rolex Masters Final 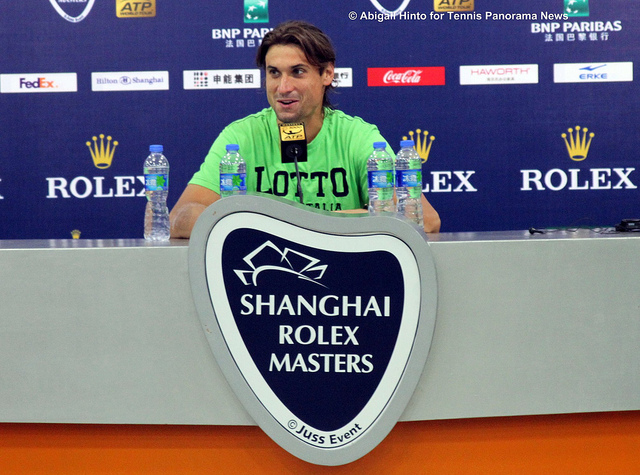 SHANGHAI, China – In tight three-set battle between Spanish Davis Cup teammates, David Ferrer edged out Feliciano Lopez 6-7(5), 6-3, 6-3 in the first semifinal of the Shanghai Rolex Masters on Saturday. Â The battle was a contrast in styles between Ferrer’s steady baseline game and Lopez’ strong serve, backhand slices and approaches to the net. Â But Lopez’s serve failed him at a crucial time when he served three double faults at 3-4 down and handed Ferrer the break in the third set. Â Ferrer then served it out at 15 to reach his second ATP Masters 1000 final.

It’s remarkable to note that Lopez leads Ferrer in their career head-to-head meetings, 6-4 overall and a 6-1 on hard court. Lopez’s game is interesting to watch as he makes full use of backhand slices which were aided by the speed of the courts in Shanghai. Â When it’s working, as it was on Saturday, he can construct points with it that lead to fascinating rallies. Â Will he slice it deep and approach the net for a volley? Â Try a drop shot with it? Â But Ferrer had ample practice against it with his match against Andy Roddick the previous day. Â As Roddick said after his loss to Ferrer, “ifÂ  it’s possible to take a hard slice on the rise, he was doing that.” Â Ferrer was missing a bit in the first set, but once he steadied his ground game and continued with his consistent serving and Lopez started to miss especially with his forehand, it was game, set, match Ferrer.

Ferrer has really been serving well this week. Â Early in the tournament, against Juan Carlos Ferrero, he saved two match points with aces. Â Asked about his serve, Ferrer said he did make some adjustments with it. Â “Well, maybe this week I improve my serve, no? Â Maybe it’s my confidence with my game. Â I change a little bit my serve. Â I don’t know how to explain in English, but I change a little bit. Â Throw higher the ball.”

This will be Ferrer’s third ATP World Tour Masters 1000 final after losing to Rafael Nadal both times in Monte Carlo this year and Rome last year. Â He did reach the finals of Shanghai in 2007 when it was still the tour’s year-ending Tennis Masters Cup. Â He’s been a solid top 10 player for about four years now, a Masters 1000 win would significantly add to his achievements.