You are here: Home / Features / Murray Powers Past Nishikori to Gain Shanghai Final 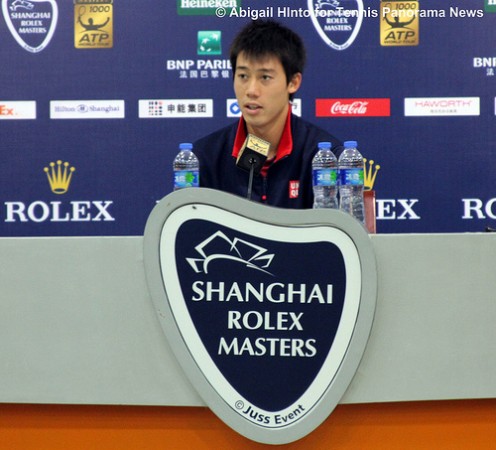 SHANGHAI, China – Andy Murray dominated Kei Nishikori 6-3, 6-0 at the Qi Zhong Tennis Center to move into the Shanghai Rolex Masters final to be played on Sunday. The Saturday evening semifinal saw the Scot completely overpower his Japanese opponent, especially on his serve. Nishikori was only able to win a mere six points on Murray’s serve during the entire match.

When Kei Nishikori was asked about Andy Murrayâ€™s strengths prior to his semifinal match, he said that Murray doesnâ€™t miss.Â  So against a player who does not miss, Nishikori needed to find his point-ending shots inside the court. Â Nishikori was unable to do it. Murrayâ€™s steady game pushed Nishikori off-balance which forced him into committing errors.

“I think he just played really well, said Nishikori. ” Little bit too good for me. You know, maybe I was excited to play semis here. But I wasn’t like really nervous or something.”

Nishikori had a career week, knocking out seeds Jo-Wilfried Tsonga and Alexandr Dolgolpolov in his run to his first Masters semifinal which will liftÂ  his ranking to close to No. 32 in the world. “A big surprise for me, said Nishikori. “You know, I was thinking if I can get a top 30 or a top 40 this year, that was my goal. And now I have couple more tournaments. If I can get to top 32 to finish this year, it would be good for next Grand Slam.”

If Nishikori had a great week in Shanghai, Murrayâ€™s having his best post-USO season so far.Â  He is now in his third consecutive final after winning Bangkok and Tokyo.Â  Should he win Sunday’s final he will move up to No. 3 in the ATP World Tour rankings, leaping over Roger Federer. “That’s something that I’ll been trying to do for these next few months,” said Murray,” because I can’t really finish the No. 2 or 1. So it’s just a goal I had for the end of the month. It would be nice to finish the year off No. 3 if I can because that would be the highest ranking I finished at. It’s not the ultimate goal, but it’s a step in the right direction.”

On Sunday it will be a repeat of last week’s Tokyo semifinals, Murray will once again face David Ferrer, the two players playing the best during this Asian leg of the ATP World Tour. Â Murray dispatched Ferrer easily in Tokyo winning 6-2, 6-3, but Ferrer has also been serving well this week. Â So as much as these two players are among the best returners on tour, the match will be a test on who will come up with the goods on their serves when it matters the most.

In his post-match news conference Murray spoke to media about his opponent in Sunday’s final – David Ferrer whom he defeated last week in Japan. “He’s always tough. He’s No. 5 in the world, so one of the toughest guys on the tour to play against. Yeah, I mean, I played well against him last week. But every match is obviously different. He’s definitely going to be bang up for the match tomorrow.

“He’s got a great attitude. He fights, well, right until the end in every single match. It’s definitely a match where if I want to win, I’m going to have to play very, very well.

“Well, last week I got a good start and made sure I kept hitting my groundstrokes ’cause against him, if you leave the ball short in the court, he has one of the most accurate forehands on the tour. So he can make you do a lot of running with that.

“I think he served better this week, because he’s probably getting an extra maybe 10 kilometers an hour on his serve because of the ball. So it will definitely be harder to break him.

“But, yeah, I mean, the main thing is just to make sure you’re not leaving the ball in the middle of the court. You need to try to dictate as many points as you can. I managed to do that last week. But I’m sure he’ll try and make some changes.”