You are here: Home / Contributors / ‘The Face-Off’ Nets Raonic a Win over Sampras 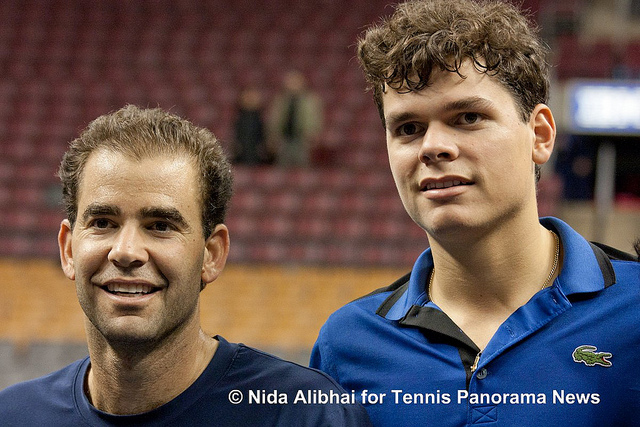 The big serve is an obvious. So is the smooth motion. The classy, well-tempered, soft-spoken demeanor both carry themselves with may not be. While it was a night of fun and laughs, at the end, both men let their tennis speak for itself. 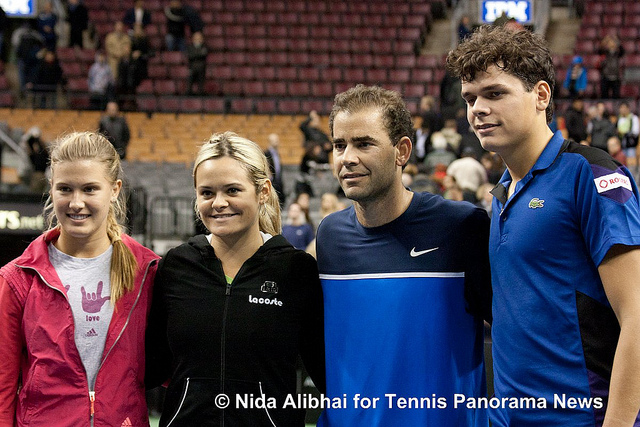 The Air Canada Centre was the scene for the the “Face-Off” exhibition. The night was hosted by Bob and Mike Bryan‘s father, Wayne Bryan. Though he may be the father of two of the greatest doubles players ever, he acted as if he was born for the role and kept the night moving along seamlessly. First up was the doubles, featuringÂ  Pete Sampras, Milos Raonic, Aleksandra Wozniak, Eugenie Bouchard, ex-hockey player Brad May, actor Hayden Christensen, and two local Canadian TV icons. Players substituted out in between games in the mini-match. The highlight was Christensen, who played some tennis in college and held his own against the pros. Even funnier was Wayne Bryan forcing Bouchard and Wozniak to play “handicapped” by holding Raonic and Christensen’s respective hands as they struggled around the court.

After that came the one set match between Wozniak and Bouchard. Wozniak missed 10 months of the season due to wrist problems, but returned strong winning the $50k Vancouver Challenger and playing well in Toronto. Bouchard, 17, and the No. 4 ranked junior, won the junior Wimbledon title and appears to be well on her way as a name to look out for. The two played solid baseline, side to side tennis that showed off their effective forehands and ability to push the ball deep. After a series of breaks at the end of the set, Wozniak took it 6-4.

After a series of contests and games, two young men from Raonic’s hometown, Thornhill, Ontario, came out to sing a song in tribute of Raonic and his job of promoting the sport in Canada. Part way through, Milos wandered out and had a chuckle while they finished their song. Asked after if he had heard it before, Raonic said that around the time of the Miami tournament “guys in the locker room would set it as their ring tone, and then call each other.”

Finally, we came to the main event. Raonic and Sampras went toe to toe in the first set, and it was incredibly close. Raonic’s serve regularly clocked in at over 210km/h and at points beyond 220km/h. After taking his first game, the classic Seinfeld “another game for Milos!” clipped played on the speakers and caught everyone by surprise, including Raonic. While Sampras’ serve wasn’t that, it was still incredibly effective. Early in the set, he backed up a great first serve with a jumping volley winner that left him shaking in disbelief. Overall, Sampras’ touch at the net didn’t look aged one bit and held up well against Raonic’s numerous passing shots. After each man traded holds 6 times, Raonic took the tiebreak behind an early mini-break.

The second set flew by as Raonic took control. Sampras appeared to be tiring (difficult to fault for a 40-year-old) and Milos’ movement looked the best it’s been since suffering a hip injury at Wimbledon this year. Raonic took the second set and the match, 7-6, 6-1. 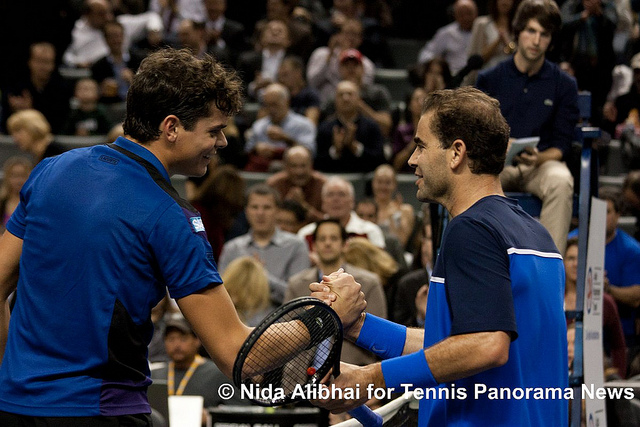 Overall the points were generally short, but when stretched, the inventiveness of both men kicked in as they hustled, created openings and hit some incredibly well angled passing shots from all corners of the court.

After the match, Sampras had nothing but praise for the humbled youngster. “I’ve seen a lot of serves in my day, but this kids serve is bigger than big”. Despite describing Raonic as having “all the tools” to succeed, he also stressed patience as the Canadian No. 1 continues to mature. “Don’t expect him to win Wimbledon next year. It’s going to take some time. He can do it but let’s be patient here. Let’s not put too much pressure on the kid.”

Before the match, Raonic still seemed starstruck. “I think I’ve watched him play a couple thousand hours more than he’s watched me,” said the Canadian before the match. After a breakout year also damaged by injury, it was a dream come true to be able to play against his idol in the first tennis match ever hosted at the Air Canada Centre. “It’s been a whirlwind, from the highest to the lowest, but you guys make this night special, and hopefully there’s many more to come.”

Raonic will now travel to Barcelona with coach Galo Blanco where he will put in weeks of conditioning in order to prepare for the January Australian hard court swing, and Canada’s World Group Davis Cup tie in Vancouver against France.

Brodie McPhee is the author of the tennis web site Mind the Racket. He was in the Air Canada Centre in Toronto covering the ‘Face-Off’ for Tennis Panorama News. Follow him on twitter @MindTheRacket.