You are here: Home / Features / ‘Oz and Ends’ – Of Trilby Hats and Twitter 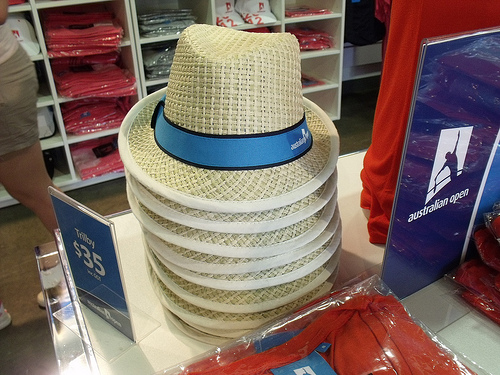 MELBOURNE, Australia – The year truly begins for most players with Australian Open. The first day of the Australian Open felt like a rebirth for players, for fans and for me. It was a sunny and dry day and from what I hear from the locals itâ€™s was one of the warmest days of what has been a cold summer.

I must say that when the fans were let into the grounds on morning, it was a very orderly hustle and bustle. Everyone, including myself headed to one of the Australian Open stores on the grounds. Some Melbourne residents told me to buy souvenirs on the first day. Funny, thatâ€™s what I tell people to do at Davis Cup ties and the US Open.

Not Just New York and Paris

One thing I’ve noticed was the number of people wearing black at the matches. Even myself, a consistent wearer of black left my black outfits (except for one dress, can’t go totally without black) and shirts back in the New York City area hearing about the 100 degree temperature one is used to hearing about each year down under.

Anyone else notice the unusually high number of of bagel and breadstick sets during Tuesday’s play? Unofficially 17 6-0 sets and 21 6-1 sets.

It’s day three at the Australian Open and I’ve gotten into my own rhythm in the media center. I arrive at around 8:30 am just as the Tennis Australia media workers open the door. I scan through the matches to see what looks competitive but I also have to take into consideration that post-match players conferences that I want to watch or attend to ask a question are taking place. Due to the wonderful world of technology provided by Tennis Australia, I can peek into the matches on the show courts and watch some the news conferences right at my desk! One could live your desk at the media center and get all the information you need without getting up out of your chair! Talk about being spoiled.

Add into the mix private interviews which may or may not conflict with post-match news conferences you want to attend or matches you may want to attend. It all a balancing act.

Everyone is in their own little media world, doing what they have to do to make constant deadlines, especially the people in TV and radio. No time to be social, except for a brief interlude at the media happy hour.

I can’t stay anchored to a chair, I like to roam the courts. You can’t see and feel the spin and the power of the ball unless you see it in person. I’m off my “see tennis live” soapbox now.

If you are a tennis fan a tennis journalist, blogger or anything else to do with tennis you need to be on twitter. I see more tennis news break on twitter than on mainstream tennis media websites. At the slams you’ll see tweeting live from news conferences, from the courts, and sometimes from the lockerroom.

I know most people are on Facebook. I am not a facebook person I am a twitter evangelist preaching the tennis news gospel! #praisethehashmarks I forgot who first called me that, it was either Pete Bodo or James LaRosa.

In twitter related matters, I really need to get either and Android or an iphone as so many of the tournaments in general create apps just for fans. If you are covering tennis you really need a phone where you can tweet, snap photos and record sound or video.

In case you don’t know by now our twitter is @TennisNewsTPN.

I have seen so many fans get sunburn while using sunblock in Melbourne. You need to pump up the spf, 30 is not enough. I’m using 100 spf!!!

Don’t forget to drink water. I think the last time I drank so much water was when I was last in Arizona.

As someone once said if you see that a match is going to a fifth set – go watch it! On Wednesday there were a few five-setters including:

â€œBehind These Walls,â€ a documentary airing on the Tennis Channel about a therapeutic tennis program for inmates of San Quentin State Penitentiary. Director Rex Miller provides a glimpse into the lives of the inmates, who use tennis to “de-stress” and “escape” from the rigors and pressures of incarceration. The film, which features an appearance by the Bryan Brothers at the prison, will air throughout the Australian Open (Wed., Jan. 18 11pm ET; Fri., Jan. 9pm ET; Sat., Jan. 21 10pm ET; Mon., Jan. 23 2am ET; and Sat. Jan. 28 10pm ET).

Karen Pestaina is the founder and editor of Tennis Panorama News. She is in Melbourne, Australia covering the Australian Open as a member of the media.Â  Follow her throughout the Australian Open on twitter at @TennisNewsTPN. She freelances for various media outlets and has worked for many a broadcast news entity. She witnessed her first live tennis match as a young child at Forest Hills when Guillermo Vilas upset Jimmy Connors to win the 1977 US Open. This branded her as a Vilas fan for life.