You are here: Home / Features / Meeting the Great Rod Laver 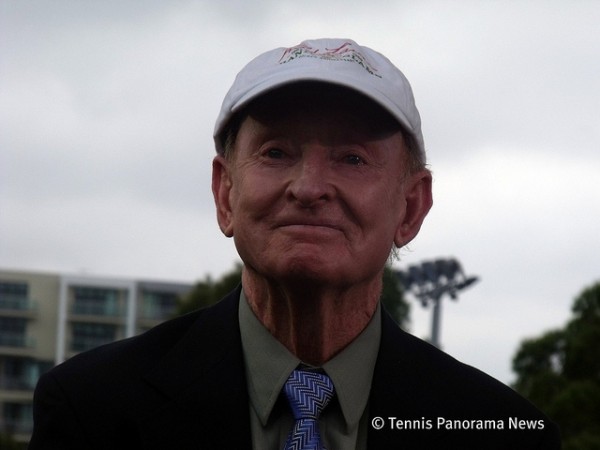 MELBOURNE PARK,Â  Australia – As someone who has worked in media since I was a teenager,Â  I rarely get excited about celebrities of any sort. It’s also rare for me to write in the first person and actually give an opinion. Some would call it being jaded, others would call it just doing what one is supposed to be doing as a reporter, I call it living among so many of them growing up in the New York City area. They are people too, so let them live their lives.

However getting the chance to see the great Rod Laver on Wednesday morning at the Australian Open as he met the press, was a rare exception for me. I was genuinely thrilled at seeing the greatest player in the history of the sport face-to-face. When the announcement was made in the media center on Tuesday night that he would be talking to media on Wednesday morning,Â  I lit up like a child at Christmas. Here is a man who played for the love of the sport and back in 1962, when he won his first Grand Slam it was a amateur sport. Needless to say I never ever saw him play as he was before my time, but my father a devout tennis enthusiast used to tell me about the great Rod Laver when I was a child.Â  His opinion has definitely influenced my thoughts on the “GOAT” (greatest of all time) discussion.

Playing a majority of a career for no money certainly has added to Laver’s legacy to me. Two Grand Slams – one as an amateur and one as a professional, I can’t even fathom it in this modern age when winning a major nets youÂ  a two million dollar check. According to the ATP World Tour web site, Laver earned a total of $1,565,413 dollars in his pro career, which is less than the winner’s check of this year’s Australian Open being played in an arena named after him.

Rod Laver is back in Melbourne Park this week to celebrate the 50th anniversary of his first Grand Slam in 1962.Â Â  According to the ATP site he won 42 tournaments and he won eleven major titles singles titles. The 73 year-old Laver lives in California these days.

I asked Laver if actually felt like fifty years had passed since he first won his first major to which he replied: “Sometimes you think, Boy, 50 years is a long time ago.Â  As I just mentioned, the flooding of memories coming back, especially when I meet Roy Emerson on the plane.Â  I played him in three of the four finals.Â  Those things immediately come back.

” Of course, he reminds me of some of the things that happened in that match.Â  Yes, it’s right there in front of you.Â  I never put a time on it, but 50 years is certainly a long time back.
“I was just honored to be able to pull it off.Â  You don’t start off trying to win the Grand Slam.Â  You’re just very happy to play the matches, tournaments.Â  The thrill of going to the French Championships, Wimbledon, US Open.
“Fortunately, the years prior to that, I had either won Wimbledon or got to the finals.Â  My ability, I felt it was possible to win tournaments, but not a Grand Slam, so… ”

Laver spoke about today’s current ‘big four’ and if back in his day they same thing existed:

“You know, it wasn’t as noticeable with the four players.Â  It was amateur tennis back in those years, so they weren’t only Australian.Â  There was a Neale Fraser, Roy Emerson.Â  The Hoads, Rosewalls had turned professional.
“When you go to Europe, you have Santana, Pietrangeli.Â  There were a lot of good players out there, but I don’t know that we could hit upon saying, There were four.Â  There were probably eight or ten talented players that won tournaments in the past.
“My thought is, yes, there were players there.Â  Again, when you’re playing amateur tennis, just playing in the tournaments, you don’t have the criteria of who wants to win it.Â  It’s amateur tennis.Â  No one was really high on, I’ve got to win this tournament for my career.Â  There was no career, because you’re playing amateur tennis.Â  There’s no money in it.
“The whole cycle has changed for the good.Â  Tennis is just unbelievable.Â  What I saw last night, being able to see the winner is going to walk away with $2 million, is great for the sport.”

The laugh of the morning came when a reporter asked about Laver about the ATP players efforts about trying to get a greater voice and address some of the problems of the tour, the schedule and the Grand Slam prize money, to which he responded, “Well, you’re probably talking to the wrong person saying, Is the prize money enough?”

He further commented, “I think the scheduling is more of a situation that the players are worrying about because of the amount of tennis they have to play in each tournament, the talent that’s there.Â  There’s not an easy match on the circuit.Â  The first round could have been a final last week.Â  You’ve got to play your best tennis from the word ‘go.’
“Back in my era, there were players that you would think would win the tournament.Â  You had an easier one or two rounds.Â  Today the schedule is so rigorous that you’ve got to be able to play all the time because of the points systems.Â  It seems like the way it’s being done now, you’ve got a lot of the points, you drop one off, whatever happens with Nadal this week, you know, he takes over, cuts off last year’s.
“There’s always things you can look at.Â  I think there’s always things we looked at.Â  We were looking at tournaments, because I came along when Open tennis came in 1968, the tournaments would start up.Â  Lamar Hunt was very big in football in the U.S., then soccer.Â  He wanted to do something with tennis.Â  He said, Hey, I got $1 million.Â  I want to get a promoter.Â  You could play 50 tournaments, $20,000 in total purse.Â  Find the tournaments, find your best 32 players that you can sign up.Â  I mean, that’s how it was happening as Open tennis was unfolding.
“It’s a different world.Â  To play for $10,000 in those WCT matches, that was big money in our world because we just left Open tennis, and I turned professional.Â  There was nothing like that sort of money out there. ”

Laver was also asked to comment about how on Friday the Equal Rights Campaign will be flying rainbow flags on Friday in Melbourne Park.
“It’s hard to know how to construct something like that, ” said Laver. ” But, I mean, to each their own.Â  Lifestyles, whatever comes up happens.
I would say it’s difficult to not have something like that that is current with politics around the world.Â  That’s all I could really say about it.”

With all of the money in tennis these days, especially among theÂ  highest ranked players, if tennis were still an amateur sport would we see all of these great athletes still in it.Â  That’s a question for another time. It was one of the rare times I’ve been in a news conference in which I could see the reverence and respect for a subject written on all the attendee’s faces.

Regardless of all the great tennis I’ve seen this fortnight, my longest lasting memory from my first Australian Open will be meeting Rod Laver. He’s a monument to tennis and he should be cherished.

Karen Pestaina is the founder and editor of Tennis Panorama News. She is in Melbourne, Australia covering the Australian Open as a member of the media.Â  Follow her throughout the Australian Open on twitter at @TennisNewsTPN. She freelances for various media outlets and has worked for many a broadcast news entity. She witnessed her first live tennis match as a young child at Forest Hills when Guillermo Vilas upset Jimmy Connors to win the 1977 US Open. This branded her as a Vilas fan for life.