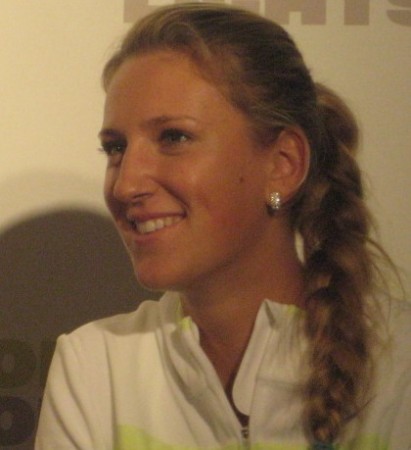 MELBOURNE PARK, Australia -Victoria AzarenkaÂ  has defeated defending champion Kim Clijsters 6-4, 1-6, 6-3 onÂ  Thursday to move into the Australian Open final to be held on Saturday night. This will mark the Belarusian’s first major final.Â  She’ll play the winner of the Maria Sharapova who defeated Petra Kvitova in the other semifinal 6-2, 3-6, 6-4.

“Well, I was really, really happy to win the match, you know.Â  I think it was really difficult third set.Â  There was a lot of ups and downs, but in a good way,” said Azarenka.
“She was coming with some incredible shots; I was really going for it.Â  So it was really important to get that 5â€‘3 lead, you know, and keep on putting pressure. ”

“Disappointed,” said Clijsters about the loss.Â  But then again, I felt like I have given it my all these last two weeks, and it’s unfortunate.Â  The match was very close.Â  There were a few deciding moments where I think I maybe had a little bit of an advantage, in the third set, especially that first game where I had breakpoint.
” But, you know, she definitely played really well.Â  She was playing very aggressive tennis, moving really well.Â  So she deserved to win at the end.

“I felt like I had to serve well today because she was returning really well.Â  That’s definitely something that always comes up, is making sure that I finish off my complete service motion before I start thinking about the next shot that’s being fired at me.
” She returned really well today, very deep, close to the baseline.Â  She likes to play a lot down the middle.Â  That’s obviously one of her strengths, is to return as fast as she can back to the server.
” It’s tough to put yourself in that position and to get out of that.Â  But she played really well, has improved her movement a lot over the last year I think, because she was returning a lot of balls, I thought. ”

Depending on the the final, either Azarenka, Sharapova or Kvitova will take the No. 1 ranking from Caroline Wozniacki who lost it earlier in the week when Clijsters defeated her in the quarterfinals. Azarenka is currently on an 11- match winning streak.

Azarenka started strongly in the first set breaking Cjisters and serving consistently. Clijsters dominated the second set moving Azarenka around the court at will. Azarenka’s serve deserted her.