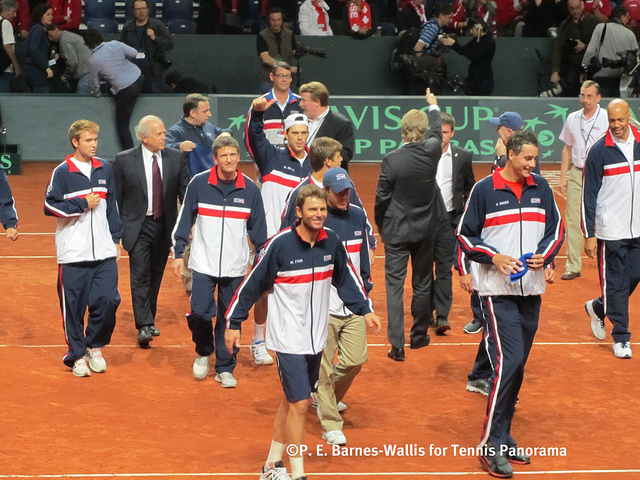 FRIBOURG, Switzerland — The shocker is complete.

The United States is moving on to the Davis Cup World Group quarterfinals after Mike Bryan and Mardy Fish defeated Switzerland’s Roger Federer and Stanislas Wawrinka in doubles competition 4-6, 6-3, 6-3, 6-3. The win gives the U.S. an unassailable 3-0 lead over the Swiss, with two dead rubbers on tap for Sunday.

The home crowd of 7000 was pumped up from the start, hoping that the 2008 Olympic gold medalists would keep Switzerland’s hopes alive.
The Swiss got off to a fast start by breaking the U.S. in the first game, which included two double faults by Fish. The home team went on to win the first set as Federer’s strong service game and Wawrinka’s lethal backhand led the way.

It was a different story in the second set. The U.S. capitalized with a break of their own. This time it was Wawrinka with two double faults in a game, and the U.S. held on to knot the mach at a set apiece, thanks to Fish’s strong net play and Bryan’s serves keeping the Swiss of balance.

The U.S. capped the third set with a Mike Bryan winner up the middle, breaking Federer for the first time in the match, and making the Swiss faithful uneasy.

But the crowd wasn’t giving up, and in the fourth set was louder than at any time during the match, the fans shouting their trademark chant “Hop Suisse” (Let’s go Switzerland). But the U.S. broke the Swiss to go up 3-1, as an unfriendly net cord for Federer resulted in a Bryan winner. At 4-2 Federer saved two break points and the Swiss faithful erupted, hoping for a momentum shift. It was not to be.

The last two points of the match were indicative of a lost weekend for Switzerland. Federer whiffed on a ball resulting in match point, after which Wawrinka netted a deep Bryan serve to clinch the victory for the U.S.

The stunned crowd left the arena, buzzing about how Federer wasn’t at his best, but giving the U.S. credit nonetheless. The question is whether Federer will play for Switzerland in the Davis Cup World Group playoff in September. A loss would relegate the Swiss to the second tier of Davis Cup.

As for the Americans, they are waiting to find out their destination for the quarterfinals. It’ll either be a trip to France, or a hike north of the border to Canada. But first, there’s another day of tennis to be played. The U.S. will likely field 19-year old Ryan Harrison in one of the dead rubbers.

At the end of the match, after the on-court interviews were complete and much of the crowd had left the arena, Mardy Fish, John Isner and Mike Bryan climbed up into the stands to high-five the NetHeads, the cheering squad that follows the U.S. Davis Cup Team around the world.

The Americans’ last three victories have been on clay: Colombia in September 2010, Chile in March 2011, and now, Switzerland. Their last loss was on the U.S.’ favorite surface, a hard court at a quarterfinal home tie in Austin, Texas last year against David Ferrer and his friends from Spain.

Junior Williams is a long-time journalist and tennis fan. At a momentâ€™s notice he can give you a list of all the Davis Cup match-ups that would give the US home ties. He is in Fribourg, Switzerland covering the Davis Cup first round World Group tie between the US and Switzerland for Tennis Panorama News.