You are here: Home / Davis Cup/Fed Cup / Notes and Quotes from Day 2 of Davis Cup â€“ US versus Switzerland 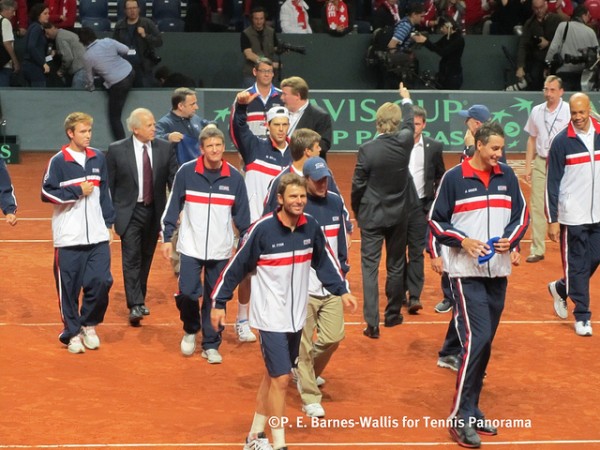 FRIBOURG, Switzerland â€“ The United States clinched a berth in the Davis Cup quarterfinal round with the doubles team of Mardy Fish and Mike Bryan stunning the Swiss team of Roger Federer and Stanislas Wawrinka 4-6, 6-3, 6-3, 6-3. The win gave the US an unassailable 3-0 lead to gain victory in the tie.

Federer on the loss: Actually played pretty good considering again it was a high standard of match on both sides.Â  We did have our own chances.Â  Maybe they were just a touch better than us today and it showed in the score.

We had our chances, played well for a long time actually.Â  Sometimes we struggled a bit too much.Â  But they deserved it.

I think they did really well.Â  I think they played well in the singles and the doubles, too.Â  It’s a pity we couldn’t go to Sunday, but that is how it is, unfortunately.

Sure, it’s disappointing, but we’re not too down about it.Â  We have respect for their performance.Â  They did really well.Â  We had missed opportunities.

Swiss Captain Severin Luthi: I mean, we knew that it was going to be a very difficult tie for us on any surface.Â  That’s what it was.

We know, for example, that Isner is dangerous on every surface.Â  Mardy is a topâ€‘10 player.Â  He’s going to be a tough one anyway.Â  We didn’t underestimate them at all.Â  For sure we wished for another result, but it has nothing to do with underestimation.

Mike Bryan:Â  This is probably going to go down as one of the most memorable, after Portland (2007 Davis Cup final).

It was a really tough tie, playing Switzerland.Â  Really tough team on the road, on dirt.Â  Everybody stepped up.Â  Jim did a great job coaching.

It was a dogfight.Â  We just hung in there.

Â We just thought we had to go in there, make a lot of first serves.Â  We were just going for our shots.

Came down to a few breakpoints there.Â  Luckily we capitalized.Â  It’s not very easy to win on the road.Â  The crowd was pretty loud.Â  I think Mardy stepped up.Â  He played a fiveâ€‘andâ€‘aâ€‘halfâ€‘hour match yesterday.

US Davis Cup Captain Jim Courier: Obviously on paper you look at the American team in recent years and you go, â€˜of course, no brainer, play us on clayâ€™.

But altitude indoors is a different surface than outdoor slow clay.Â  I’m sure they recognized that.Â  Conditions we knew were not going to be our favorite, but also not the worst for us.

I have to give our guys credit for coming in here and grinding all week on a surface which started off as a pretty poor court and got better every day.

Our attitude remained strong all week long.Â  We were ready for whatever.Â  That’s really what we needed to be.Â  Every road tie you have to come in for the unexpected, ready for everything to be the worst.Â  Our guys never wavered from that commitment.Â  I think it showed.Â  When we got bad bounces, as did the Swiss team, we just shook them off, just kept playing.Â  It worked out well from that standpoint.

I mean, if I was the Swiss captain, I was looking at the American team, I would have said, Of course, red clay.Â  I think every team would be thinking that if their team were as good as Roger and Stan are on this surface.

Mardy Fish: Physically I felt fine.Â  It’s what we train for.Â  Mentally Davis Cup obviously takes a lot out of you.Â  So three days in a row would have been tough to play.Â  But we’re happy about that.Â  We’re happy to pull through, obviously.

It’s great that the guy that I have to tee it up with is the best doubles player ever.Â  It’s pretty easy.Â  I’m just trying to do my part on that side.Â  He played great today, Mike did.

Courier fielded a question on whether it’s “all business” with his suit:Â  That’s not really what I’m saying with it.Â  But I made a decision when I was offered this captaincy that I would do that because I wanted to make it clear to everyone that there’s absolutely no chance that I’m going to be swinging a racquet.Â  I’m going to be sitting down, watching what’s going on.

When it’s hot outside in a place like Santiago, Chile, I wore slacks and a collared shirt because it was too hot to wear a suit.Â  This will be my uniform just as this is these guys’ uniform.Â  I hope you don’t mind too much, but I honestly don’t really care what you think (laughter).

Courier on what team the US will face in the quarterfinal round in Davis Cup on the road: Worst draw you can have.Â  If it’s Canada, it’s not as bad as France on paper.Â  But you saw what paper meant here, which is absolutely nothing.

I think the winner of that most likely gets Spain away.Â  So we have a very tough draw, but we got through a tough one here.Â  That should give us some confidence going forward.