You are here: Home / Contributors / Americans Isner, Querrey and Harrison Advance in Memphis

MEMPHIS, Tennessee (February 21, 2012) – On Court 1 at The Regions Morgan Keegan Championships on Tuesday, Frenchman, 30-year old Julien Benneteau teamed with (his fourth different doubles partner in four tournaments played in 2012) Belgian 31-year old Olivier Rochus (himself teaming with his fifth different doubles partner in 5 tournaments) to beat 2011 US Open champions and #2 seeds 27-year old German Philipp Petzschner and 30-year old Austrian Jurgen MelzerÂ  6-1, 3-6, 10-5.Â  The atmosphere for the intimate Court 1 was intense, and the crowd was animated throughout.Â  Both teams traded steely glances towards each other, exasperation for missing shots, and some interesting bits of questioning line calls and the chair umpire.Â  Late in the 1st set, Melzer asked the chair how the lineswoman could possibly make lines calls â€œbecause she is wearing sunglasses inside!â€Â  The close quarters on Court 1 heightened the fun of the experience, and there was a palpable buzz running through the crowd most of the match.

Later on Center Court, 24-year old American Ryan Sweeting defeated veteran American, 32-year old James Blake 6-0, 6-2.Â  Six-foot-five Sweeting, ranked 78, moved well throughout the match, and his crisp hitting and defense forced Blake, ranked 61, into many errors.Â  Blake, playing in his first tournament of 2012, looked deflated for a good portion of the match, perhaps partly because of some rust in his own game.Â  Sweeting played an impressive mix of defense and high percentage tennis, and capitalized on most short ball and mid-court opportunities he found during the baseline rallies.

Next up on Center Court, was 24-year old American Sam Querrey against 28-year old Colombian, Alejandro Falla.Â  Querrey, ranked 99, recently hired Brad Gilbert as his coach, and Gilbert was in Memphis watching his new charge tough out a 3-set win over the scrappy Falla.Â  Falla, ranked 60, consistently attacked Querreyâ€™s backhand throughout the match and built himself a solid lead by taking the first set 6-2.Â  It took Querrey some time before he got his forehand clicking but he recovered to take the final 2 sets 6-3 and 6-4.Â  This was a good win for Sam, who has struggled at the start the year and has not won 2 matches in row in 2012- he plays the winner of Robbie Ginepri and Kevin Anderson in his next match. 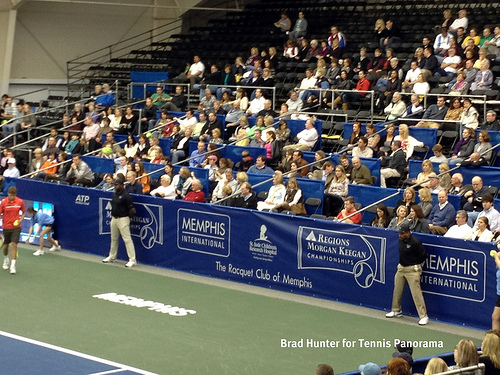 The first night match pitted 26-year old American and top seed John Isner versus the dangerous 28-year old Gilles Muller from Luxembourg.Â  From the beginning, the crowd was vocally behind the 13th ranked Isner and he made things even more interesting for spectators sitting behind the baseline to the left of the chair because several of his balls went flying renegade into the crowd.Â  It happened at least 7 or 8 times, and a man sitting behind â€œTHE baselineâ€ center service line responded by waving a white towel.Â  Isner even walked up to the behind THE baseline crowd after a changeover to apologize and laugh with them.Â Â  Muller, ranked 69, also sent a few balls into the crowd.Â  Both men, known for their fierce serves, played themselves into 2 tiebreakers.Â  Isner, who hit 26 aces, ran away with the first tiebreak 7-1 by playing aggressive tennis and attacking short balls and moving forward to the net.Â  Muller fought well in the second set, saving 5 of 5 break points, but eventually fell in the tiebreak 4-7.Â  Isner, who combined with his doubles match has won 4 straight tiebreak sets in Memphis, got a loud reception from the crowd for winning the match and next plays Donald Young.

The final match of the evening featured 2 wildcard American teenagers: 19-year old Ryan Harrison and 19-year old Jack Sock.Â  Both men appeared nervous to start, but it was the more experienced Harrison who saved all 3 of his break points during the 1st set.Â  Harrison, ranked 73 and off a semifinal run in San Jose last week, played a steadier more high percentage style of baseline tennis to take the 1st set 6-3.Â  Sock, ranked 306, began the match hitting more flat and powerfully than Harrison and with more errors, but adjusted his game in the 2nd set.Â  Harrison also appeared to go on a mental walkabout, losing 2 service games and the set 2-6.Â  The 3rd set brought out the best tennis of the match.Â  Sock, attacking short balls and utilizing his crisp volleying skills, looked like the stronger player early in the 3rd.Â  But Harrison played some good defense, and turned the match in his favor by doing what Iâ€™ve been seeing a lot of this week: he played some solid defense and prolonged points against the more go-for-broke style of tennis Sock was playing.Â  The low margins eventually were Sockâ€™s undoing, and he lost the break and the set 4-6 to Harrison.Â  Both men are the same age, but Harrisonâ€™s got a bit more experience playing tour matches, and he used this confidence to good effect in winning this match.