You are here: Home / Approach Shots / Five Questions with Ana Ivanovic Before the Australian Open 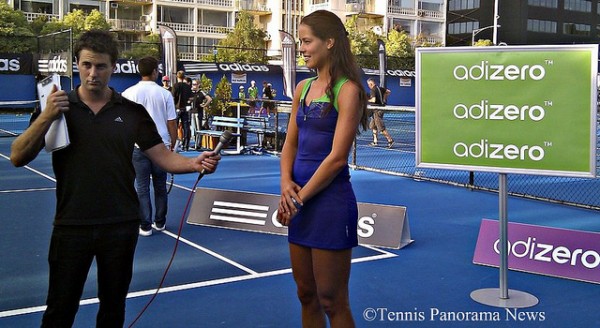 Melbourne, Australia â€“ January 14, 2011 – Ana Ivanovic took time out to answer a few questions for Tennis Panorama News. Ivanovic, along with coaches from the adidas development programÂ  were at the Albert Reserve Tennis Centre in Melbourne to help launch adidasâ€™ new Adizero shoes.

Tennis Panorama News: Congratulations on your performance at the Hopman Cup last week, itâ€™s a shame you had to pull out. How are you feeling physically before the Open?

Ana Ivanovic: Physically Iâ€™m feeling great, my stomach feels good. Itâ€™s unfortunate that I had to pull out last week, but unfortunately these things happen and we cannot avoid that.

TPN: How did you find playing with Novak last week? You guys have really good chemistry between you.

AI: It was so much fun. Weâ€™ve known each other for a long time and we are really reat friends. And we joke around and weâ€™re never serious. Heâ€™s also a funny guy and I really really enjoy playing with him.

TPN: Have you looked at the draw for the Open yet? How do you think it will go?

AI: Yeah I had a look just before when I was walking off the court. Iâ€™m focused just on my first round match (against Makarova), because sheâ€™s a tough opponent. Last year I played her just at the US Open actually, so I think itâ€™ll be a tough first round match and Iâ€™m looking forward to it.

TPN: What are your goals for the rest of the year, in terms of grand slams and other tournaments?

AI: Iâ€™d love to win a slam. I think I can achieve that, and that would be really good.

TPN: Have you traveled around other parts of Australia?

I travel a bit, I would like to do it a bit more but it is hard with tennis tournaments.

The interview was conducted by Julie Zhou covering the adidas Adizero launch in Melbourne for Tennis Panorama News. She is the author of All I Need is a Picket Fence.