You are here: Home / Events / Tennis Night in America Spokesman McEnroe Says There is “Work to Be Done” To Get Kids into Tennis 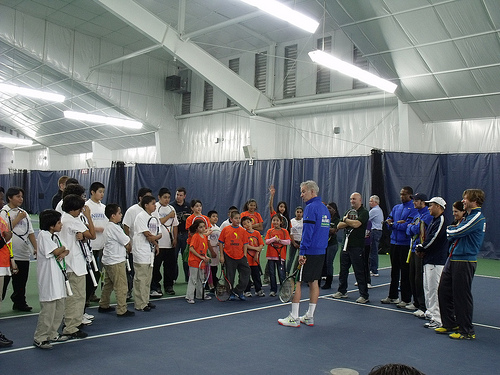 Seven-time major champion and native New Yorker John McEnroe will serve as the spokesman for Tennis Night in America. Tennis Night in America is an annual celebration of tennis since 2009 that includes youth registration events at facilities around the country and is highlighted by the fifth annual BNP Paribas Showdown at Madison Square Garden on March 5 featuring former number ones Caroline Wozniacki against Maria Sharapova followed by Andy Roddick taking on Roger Federer. It’s a team effort between the United States Tennis Association (USTA), StarGames, Inc., and MSG Sports to celebrate of tennis.

The evening’s events will begin with local children in a 10 and Under Tennis demonstration. Similar to other children’s sports where equipment and playing fields are scaled down to size for kids, 10 and Under Tennis gives the younger players the chance to be successful initially by playing tennis on smaller courts, using smaller and lighter racquets and slower-moving and lower-bouncing balls.

As part of his duties as spokesman this year, McEnroe lead a youth tennis clinic with children from the New York Junior Tennis League (NYJTL) on Wednesday afternoon February 29, 2012 at the Sportime facility on Randalls Island. McEnroe who runs his own tennis academy at the same facility talked about encouraging children to take up tennis:”I have been long in trying to get as many kids as possible to play this sport. A lot of people are trying to think out of the box that the game has been inaccessible and not affordable enough so it’s nice to see kids get an opportunity to play. The more that we can do that the better chance we’ll have with success in the future. Maybe kids thinking that they actually want to play tennis perhaps before other sports.”

“We need to find some of the kids that have turned to the other sports – football’s an obvious one, even soccer, basketball and try to get these kids to look at tennis, that’s something I want to do and obviously could afford to do it.”

In terms of player development, I asked McEnroe about what he and his academy are doing to help get children into the sport of tennis. He admits there is a lot of work to be done. “We are still trying to figure it out, McEnroe said. Â And I believe it’s going to be an ongoing thing for the coming years.”

“You know we are right next to Harlem and I have been trying, and I’ve met with met with charter schools or schools that maybe have a different curriculum or public schools, but obviously my whole idea was to do things in the New York area close because it logistically gets to be a bigger and bigger problem the farther away you get. But we have this gold mine as far as I’m concerned, close by you know and a resource and we owe it to ourselves I think what we are trying to accomplish in the sport to try to do a better job of reaching out..that’s easier said than done.”

“I try to drum up enough corporate sponsorship so that I can afford to give as many kids as possible who can’t afford to play the chance to play, that cost money. The people that started this academy spent 19 million dollars building the facility. So my guess is that they don’t want to lose that money. So there is this fine line.

“You’ve got a ride, this is a business. This is owned by the city. The city benefits from it. (The) Randalls Island Sports foundation benefits. They are getting a significant sum of money every year, more than anyone else is getting here. So again it’s the way you look at things.

“I think that my goal since I’ve been fortunate to get a lot from the sport through the years would be to try make this sport sort of thought in the same what that some kid maybe the next Michael Jordan, maybe, that he might say ‘you know something I think I want to play tennis instead of basketball.’ That’s sort of like my goal that we could have kids that think ‘hey this is cool’ not like ‘oh god tennis.’ So this is a battle, you know fighting for ever since I was a kid and will continue to fight.

“So certainly we all could do more and we want to do more. When you get into specifics, it’s easier said than done. But were definitely out there, you know looking for ways to get the buzz back. My goal at the very beginning was to get the buzz back to the sport. It’s a sport that’s given me a lot,

“Athletics is getting shortchanged in school, even in private schools, even where I went. I can only imagine how bad it is in public if private is as bad as it is. You know they don’t give the time for kids, there’s so much stress. Kids need a release to me. They need to get out there, and whether it may be art, they might love that, they may love music, but to me sports is a great way to have a great release and hopefully we can provide that too.”

Continuing to promote junior tennis and 10 and under tennis across America is a key to the future of the sport noted McEnroe. “Tennis Night in America brings focus to all of this so I am excited to be a part of it.”