You are here: Home / Features / Around the Grounds with “Behind These Walls” Filmmaker Rex Miller at the Sony Ericsson Open

Director/Filmmaker/Photographer/Tennis Coach Rex Miller is down at the Sony Ericsson Open in Key Biscayne this week.

I had the great opportunity to do some directing on a new promotional campaign for the WTA (I can’t talk about the details yet, but we were shooting all the top players, lots of fun, three – 18-hour days). This is my first post forÂ  Tennis Panorama as I wandered the grounds of the Sony Ericsson Open on Wednesday. 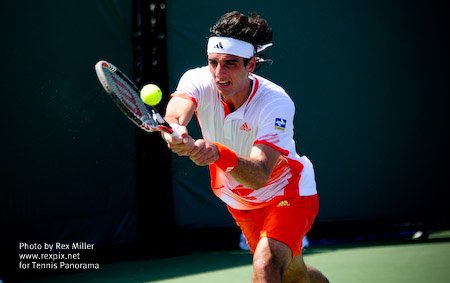 Thomaz Bellucci had a great run last week at Indian Wells, he pushed Roger Federer pretty close to the edge, and was a few points from taking the match, so I was eager to check him out up close. He was extremely flat in a morning match against Frederico Gil of Portugal, who was extremely pumped up. The crowd was split between the Brazilians and the Portuguese, both sides waving flags, and singing songs. The Brazilians had little to cheer for as Bellucci fell behind a set and two breaks at 4-1. Gil got a little tense and seemed to be begging Bellucci to come back in and join him for a fight, much to the delight of the Brazilians. Bellucci clawed back to 4-3 and had two break points but he felt the pressure and Gil was able to hold, and eventually limped across the finish line for 6-4. I say limped because both players were afraid to hit out, opting for steady play in the breezy conditions.

I’ve always thought that Bellucci’s talent was at a much higher than his results. He left the court despondent and skipped his post-match media conference. 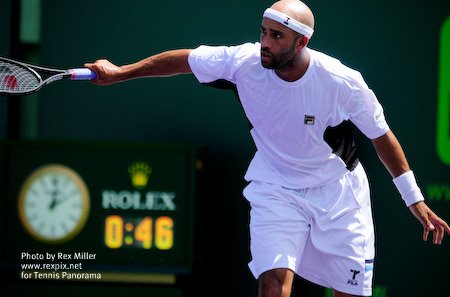 I caught the first set of James Blake– Nikolay Davydenko where Blake again proved that he has one of the best forehands in the game, as he ripped winners from many spots, with the crowd oohing and aahing. 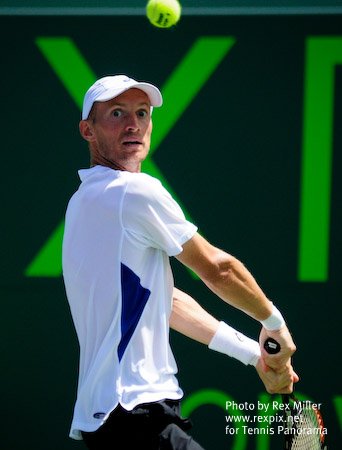 I’ve seen Blake too many times to get emotionally attached during his matches. I heard he eventually succumbed to the steely Russian, who–despite being one of the more un-animated players, is a joy to watch for those of us who love great footwork and amazing ball-striking.

I was anxious to catch American wild-card Denis Kudla, the 19 year-old from Washington, DC by way of Ukraine. I spent some time with Kudla two years ago as he was a subject of a documentary I shot for Tennis Channel “Who’s Next.” He’s a product of the Champions Training Center in College Park, which also produced University of Virginaâ€™s freshman sensation and current NCAA No.1 Mitchell Frank and Texas A&M’s Junior Ore. Kudla is one of the best ball strikers you’ll see, he has absolutely great technique on both sides, has a good bit of pop on his serve and although being about 5’9″ or 5’10,â€ has bulked up in the shoulders a lot in the last two years and will probably continue to do so. 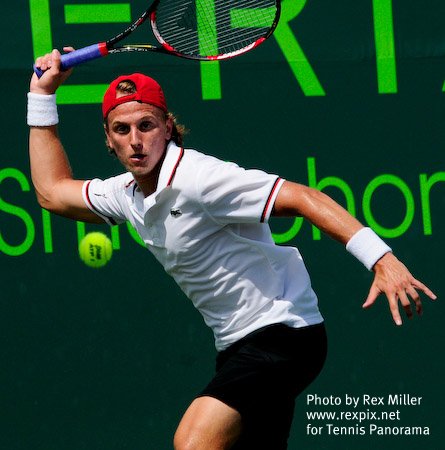 Today, Kudla was up against qualifier Antonio Veic from Croatia and he came out smoking. The two had long rallies with Kudla often controlling the action, ripping from both sides and occasionally venturing to the net to finish points with crisp volleys and a deft touch. He broke the Croatian twice to take it 6-2. Kudla has steadily climbed the rankings and is now at around 160. I sat next to his agent Sam Duvall who mentioned what an important match this was for a kid who is 160–big points at these Super Masters series, a great opportunity for a big jump, one that is hard to come by in the dogged ATP world. Kudla couldn’t maintain his high level and eventually lost in 3, I’m sure a disappointment to the hard-working kid, but look out for him because I think he’s going to have some good results in the near future.

Rex Miller is a filmmaker/tennis coach and self-described tennis geek who is covering the Sony Ericsson Open for Tennis Panorama News. He was the Director and Producer for the documentary – Behind these walls which aired on Tennis Channel. It talks about the unique world of â€œtennis behind barsâ€ at San Quentin State (CA),Penitentiary, one of Americaâ€™s most infamous prisons. Read more about Rex and his work at http://www.rexpix.net/.