You are here: Home / Features / Venus Williams – Champion and “Cheagan”- in Her Own Words 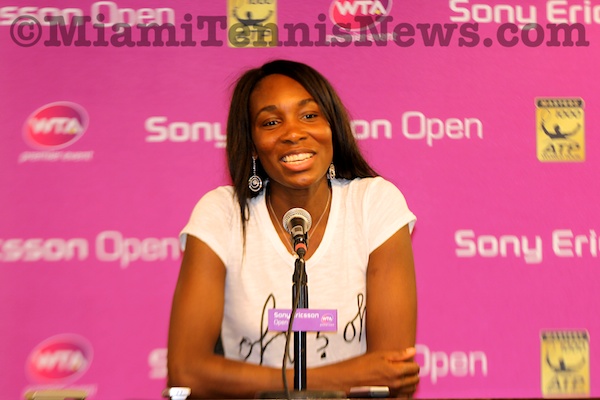 (March 22, 2012) Playing in her first singles match since announcing that she’s suffering with the auto-immune disorder Sjogren’s Syndrome, 31-year-old Venus Williams destroyed 41-year-old Kimiko Date-Krumm 6-0, 6-3 on Wednesday in the first round of the Sony Ericsson Open in Key Biscayne. Williams who has won 43 titles in her WTA career spoke to media about how she feels about coming back. Here are a few excerpts from her post match news conference:

It was great to be back out there. You know, it was definitely nerve wracking, especially playing an opponent that I know how talented she is and first match back.

But, you know, I was able to get a great start and settle in and play well against, you know, a really difficult opponent.

I definitely wanted to come out focused, so that was definitely an ideal, ideal start.  I’m glad it happened that way.

I mean, just to be in this tournament is a huge win for me; just to be here is a win.  You know, that’s what I told myself going in, that this is a win.  I have nothing to lose.  Just, you know, to gain.  Just to get back at this level is a win for me.

Well, I feel like a person that has an autoimmune disease.  You know, for me, I’m not gonna probably feel like everybody else.  But for me, my personal best is to give 100%.

You know, I felt good enough to…

Why doesn’t anyone ask him a question?  He goes everywhere with me.

TPN:  If you have to give from 1 to 10 how you played today, what would you give?

VENUS WILLIAMS:  I was happy with how I played today.  I wasn’t sure how I was gonna come out.  I mean, I’m always positive, but it’s definitely hard to play the first match.

I’m confident I will give it 110%.  My goal is to peak for the Olympics.  Like just to win a match helps me in my goal, and to win another match helps.

So the good thing is that I’m playing well.  I know how to play, so I haven’t lost any steam in that, you know, the fact that I can play tennis.  So that’s really comforting.

It’s just that I might find something on someone else’s plate that I in that in my past life I was accustomed to eating, so that’s what cheaganism is all about.  It’s a crossover.

On whether or not she’s confident about receiving an Olympic Berth:  Yeah, I have been talking about the Olympics ever since I played the first one, so, um, for me there’s no limits to what I can achieve.  Even if, you know, the odds aren’t in my favor I have still been able to do really well.

So I believe I can do it.  So just stay tough, I guess.

Williams will play No.3 seed Petra Kvitova in the second round. There only meeting came four years ago in Memphis when Kvitova stopped the American in three sets.