You are here: Home / Davis Cup/Fed Cup / Davis Cup: Looking Back at US vs France in 2002 at Roland Garros

Tennis Panorama News will be covering the Davis Cup quarterfinal tie this weekend between the United States and France being held at the Monte Carlo Country Club. Weâ€™re taking a look back atÂ  past ties between the two countries. 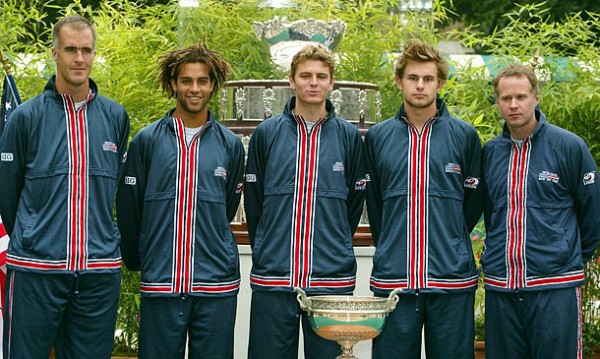 The French Tennis Federation pays tribute to the Musketeers hosting the tie in Roland-Garros. In the beginning, the French stadium was built in 1928 to receive the United States after the Musketeers won their first Davis Cup in Philadelphia. Seventy-five years later, France and USA face each other again at Roland-Garros.

France: The team built by Guy Forget is the current champion, and the captain brings the best line up possible: SÃ©bastien Grosjean, 9th, as the leader, followed by Arnaud ClÃ©ment, 42nd. The doubles team is a young MichaÃ«l Llodra with the almost veteran Fabrice Santoro. On clay, French players are the favorites of this tie.

USA: Since his arrival at the head of the US team, in 2000, Patrick McEnroe makes the choice of bringing new blood to the team. For this tie against France, he lines up three young guns: Andy Roddick (11th), James Blake (27th) and Mardy Fish (88th). The last guy is Todd Martin (still 51th), veteran of the glorious 90â€™s for the US tennis. The view from France â€“ Roddick and Blake are a scary duo, with loads of potential! In seven matches, Roddick is still undefeated in Davis Cup.Â…

SÃ©bastien GrosjeanÂ : â€œBefore, I was struggling to give my best in Davis cup. I wanted to do too well for all the team and I didnâ€t play my best tennis. This time, I think this tie between France and USA was my best performance. I tried to play for myself on court, and only after I shared my joy with the rest of the team. It helps me to focus on myself on the court.â€

Andy Roddick: â€œIt hurts me. Iâ€™ve lived so many things not very funny this week, new sensations for me, and I will have to learn from it. Now, I think I will be better prepared to play difficult matches in Davis Cup… But the atmosphere here was absolutely fantastic. I hope some day I will live that with the US team !â€

Arnaud ClÃ©ment: â€œThere is nothing more exciting than playing this match against Andy. I knew that if could run well, I would neutralize him on the baseline, and eventually drive him nuts !â€

James Blake: â€Itâ€s the biggest deception of my life. Really, losing a match in Davis Cup breaks your heart, particularly because I had my chances. I never felt so bad, but now Iâ€™m going home and try to forget. I look forward to do something well in this team in the future. Itâ€™s when I lose like this that I really want to go back to work harder. Iâ€™m going to do the gym.Â…It will look less painful than before.â€Â

Fabrice Santoro: â€œI would say that those kind of matches are the ones I enjoy the most. I really had fun during this doubles, even if we lost. You enter the Central of Roland-Garros, your team leads 2/0, the Central is packed from the startÂ… There is something in the air!â€

MichaÃ«l Llodra : â€œThis loss against the Americans in doubles really hurt me a lot. The press said it was my fault if we lost, that maybe I shouldnâ€™t have play, that I lacked experience. I took everything in the face and it took me sometime to get over it. But I bounced backÂ… Since 2003, I was never out the team. Itâ€s Davis Cup! There is a lot of pressure. It has made me stronger.Â â€œ

Todd Martin â€“ The End: Does he know? Probably. This France/USA tie is the last selection of the long career of Todd Martin. The American, who won the Davis Cup in 1995, is here to bring his experience for his young fellows. I did the perfect job during the doubles, with James Blake. The veteran made a strong impression about his knowledge and tennis culture in his news conferences, citing Decugis, Lacoste and Cochet as legends of the French tennis.

In December, in Bercy, the French will lose the final against the Russians. The end of a great period for that team: Guy Forget gets his first critics about the selection of young Paul-Henri Mathieu for the last rubber; the French captain splits with Fabrice Santoro a few months later; and, little by little, EscudÃ©, Grosjean and ClÃ©ment step down from the team during the following campaigns, to let young Richard Gasquet, Gael Monfils and then Jo-Wilfried Tsonga take over. Three time finalist in four years between 1999 and 2002, it will take 8 years for the French team to reach another final.

On the other hand, this tie starts a new chapter for the US team. Roddick and Blake take the lead of the group, joined by Bob and Mike Bryans in 2003. They will be the hard core team for almost ten years, occasionally joined by Mardy Fish. They will reach the final in 2004, and most of all win the title in 2007.

Tennis Panorama News is covering the Davis Cup between the United States and France this week taking place at the Monte Carlo Country Club from April 6-8.Â  Look out for updates here and on twitter @TennisNewsTPN.