The Monte Carlo Country Club just meets with all your expectations. Cliffs hanging above the Mediterranean, bright blue sky around; itâ€™s the perfect scenery to host the Davis Cup tie between Â France and USA. 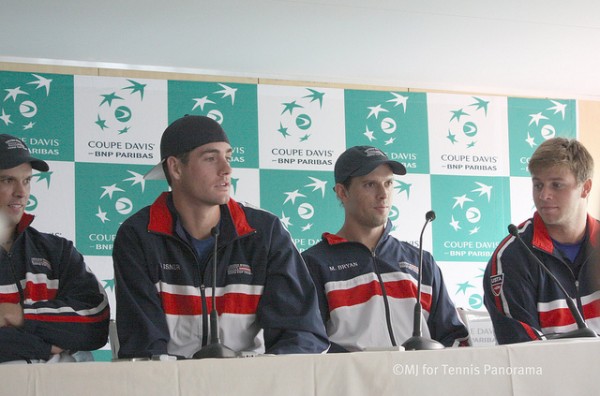 This morning between two training sessions, both teams came to the traditional first news conference of the tie. The US team was present in full: Captain Jim Courier, John Isner, Ryan Harrison and the Bryan Brothers.

Jim Courier: Â â€œNo, we were not surprised.Â  We thought there was a pretty good chance that either Simon or Gasquet would be involved at some point.”

On choosing Ryan Harrison: â€œRyan was the best man for the job, thatâ€™s why heâ€™s here.â€

Ryan Harrison: â€œObviously Jo is a great player and he’s a very established player on the Tour, but I think that especially in a Davis Cup situation where you’re playing for your country every match is very important.

I’m just excited for the opportunity.Â  It’s going to be a fun match.â€

â€œI love to play on clay.Â  Where I grew up in Louisiana I had 12 clay courts, and I grew up playing, so I’m very comfortable sliding and I like playing on it.Â  It’s going to be something that helps my game.”

John Isner on being the top player of the team : â€œIt doesnâ€™t change anything being number 1 or 2. All matches will be tough to play.â€

â€œThe court is fine, no bad bounces,Â  the conditions of play suit my game. Itâ€™s one of the nicest courts Iâ€™ve seen on clay.â€

Bob and Mike Bryan : â€œ Weâ€™ve played Mika (Llodra) at least 20 times. He has beaten us a bunch, and we have beaten him a bunch, so we have to play well. We like playing here. We are pretty comfortable; we have been playing here for 10 years.â€ (they are the current champions of Monte Carlo tournament).

The French team followed, minus Gilles Simon trapped in his last minute trip from Paris.

Guy Forget : “I was a bit surprised to see Harrison on the team. I expected more Querrey or Roddick. But if Harrison is here, thatâ€™s because Jim trusts him.â€

â€œI know there are a lot of questions about my team selection. First, Gilles is better ranked than Richard. Then, I spoke with both, and also with their doctor, before making up my mind. Richard has an elbow injury, and canâ€™t really serve. On the other hand, Gillesâ€™s back is much better. I didnâ€™ t even Â have to make a choice, it was obvious. There is absolutely no problem with Richard about is non-selection.â€

â€œMy doubles team, Mika and Julien (Llodra and Benneteau), gives me some other options than Jim can have with the Bryans. I told them, thay have to be ready to play in singles.â€

Jo-Wilfried Tsonga and MichaÃ«l LLodra: â€œHarrison is a young player on the rise. He is a warrior on court, even if heâ€™s bit temperamental. Iâ€™m sure heâ€™ll get better on that. Weâ€™ll watch out.”

Guillaume Willecoq is at the Monte Carlo Country Club covering the US versus France quarterfinal Davis Cup tie as media for Tennis Panorama News. Follow updates here and on the twitter account @TennisNewsTPN.