You are here: Home / Davis Cup/Fed Cup / Davis Cup: Looking Back at US vs France in 2008 in Winston-Salem

Tennis Panorama News will be covering the Davis Cup quarterfinal tie this weekend between the United States and France being held at the Monte Carlo Country Club. Weâ€™re taking a look back atÂ  past ties between the two countries. 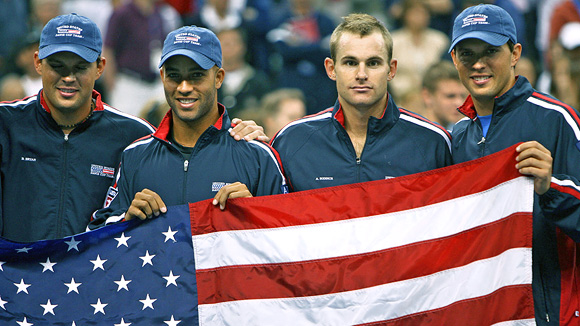 Itâ€™s the 15th match between USA and France in the Davis Cup history. The last tie between the two teams was in 2002, when France beat the USA on the clay of Roland-Garros. This time, the match takes place in the United States, at Winston-Salem. Itâ€™s the third time the US team makes the choice to play at the Lawrence Joel Veterans Memorial Coliseum, after India in 2001 (4/1) and Spain in 2007 (4/1).

USA: For the 10th consecutive tie, the team is made up of Andy Roddick (6th) and James Blake (8th) in singles, and Bob and Mike Bryan, world NÂ°1 in doubles. Mardy Fish (42th) acts as the sparring. With this competitive group, the USA won the Davis Cup a few months before, beating Russia in final (4/1). Against France, Patrick McEnroe and his boys received on a very fast indoor at Winston-Salem.

France: Richard Gasquet (10th) is the team France leader. But the new star in this group is Jo-Wilfried Tsonga (13th), who recently reached the Australian Open final. They both should play in singles, whereas Michael Llodra and Arnaud ClÃ©ment, current champions of Wimbledon, will face the Bryan brothers. But nothing goes as predicted: first, Jo-Wilfried Tsonga is walk-over due to a knee injury and the captain picks Paul-Henri Mathieu and MichaÃ«l Llodra for the first rubbers. Then, Richard Gasquet doesnâ€™t feel like playing Andy Roddick and refuses to go on the court on the Sunday. Drained by his match against Blake, Paul-Henri Mathieu loses in straight sets the decisive rubber.

Andy Roddick: â€œIt’s nice to get rewarded for all the rough losses that we had, and I’ve been a part of a lot of big losses for us in Davis Cup. You’ve got to try to keep an even keel when things are going your way, but obviously it’s been fun having won the last sixâ€¦.â€

Paul-Henri Mathieu: â€œI think I deserved to win the match against James. In the end, it could have gone either way. I played the right way till the end, but James came up with big shots to take the match, credit to himâ€¦ And against Andy, I probably faced the best player in the world on the surfaceâ€¦ Iâ€™m tired and disappointed because I gave it all during this week-end. I tried my best. As far as I am concerned, I can look at myself in the mirror. And be proud.â€

James Blake: â€œAgainst Paul-Henri, I never want to feel like Iâ€™m out of it. He had been serving really well, but funny things can happen when youâ€™re serving for a match, especially in Davis Cup. And so I did my best to put the pressure back on him and make sure he knew he wasnâ€™t going to get a free game out of it.â€

MichaÃ«l Llodra: â€œWe knew we had to make a great match against Bob and Mike. Itâ€™s maybe the reason why we had a great record against them. Today, another time, we could raise our level. Arnaud and me are close friends inside and outside the court, it helps us a lot. We had a lot of fun. Itâ€™s for those kind of matches, in front of 15Â 000 people, that we play. And with your best buddy, itâ€™s fabulous.â€

Guy Forget: â€œIâ€™m not there to analyse Richardâ€™s problems. I spoke with him. Richard is going through a difficult time. He had some nagging injuries and didnâ€™t win a lot of matches. I support the players, and what we said to each other stays between us. Richard is different, you have to deal with it. This week-end his mind was on other things.â€

Concerning the French team, for the first time itâ€™s obvious that Guy Forget is struggling with his young players. Since then, Richard Gasquet has been a second choice in the French team, behind Jo-Wilfried Tsonga and GaÃ«l Monfils, only playing twice in singles. Jo-Wilfried Tsonga, missing the group in Winston-Salem, is a big factor on the winning chances for the team : step by step, he has become the boss. Since he plays in Davis Cup, his single loss came to Rafael Nadal on clay, in 2011! He wasnâ€™t there against Serbia for the 2010 final, and left the team with fewer options to win the title.

For the US team, the defense of the title lasted until the semifinals, when Spain stopped them on clay, in Madrid. Since then, the USA has travelled for far away ties, all of them on clay. This week at Monaco, it will be their 6th tie on clay in the last 8â€¦ They learned how to beat the Swiss on clay, against all odds, can they repeat the feature against France ?

Tennis Panorama News is covering the Davis Cup between the United States and France this week taking place at the Monte Carlo Country Club from April 6-8.Â  Look out for updates here and on twitter @TennisNewsTPN.