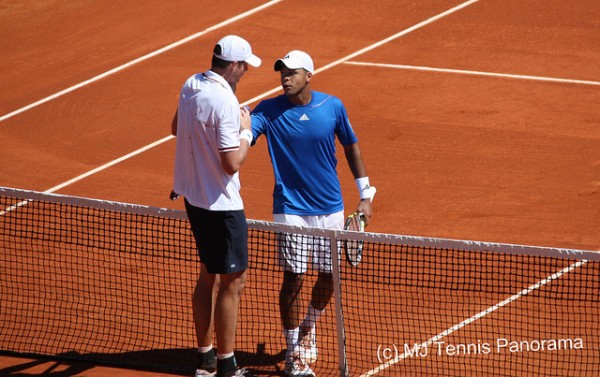 â€œBefore, it was Andy Roddick the biggest closer of the US team, maybe I can do as well.â€ For the first time, John Isner clinched a Davis Cup for the US team, after an amazing match against Jo-Wilfried Tsonga. â€œI was pissed off to have to admire the way he was playingâ€ said Guy Forget, fair play. The US boy from Greensboro, NC ended Guy Forget’s run as French Captain.Â  Forget led the French Davis Cup team since 1999. The new captain wonâ€™t be named before September. For the US team, they will face Spain again in semifinals, as in 2008, â€œI assume on clay, laughs Isner, but we will be ready to go!â€

The French team at their news conference :

Jo-Wilfried Tsonga: â€œJohn has played a huge match. I wasnâ€™t in a great day. John was better than I was. He played better the important points, and played more aggressivelyâ€¦ Itâ€™s not a surprise he can perform at this level. But I was surprised he could keep this level through the whole tie.â€

â€œGuy was the only captain I knew, and every time he made me like this competition, and tennis even more. He shared his love of the game. Itâ€™s the most beautiful thing to me.â€

Guy Forget: â€œThe deception is a little easier to accept since it comes from the hands of Jim Courier, a really good guy. Jim was a role model, and his players are just like him. This US team and mine have many values in common.â€

The US team at their new conference :

John Isner: â€œI believe in myself : if I can play like I play this week I can beat a lot of people in the next Roland-Garros. Beating Gilles and beating Jo are two very good wins, I played very well, if I can keep this level up Iâ€™m gonna be tough to beat.â€

â€œJim definitely helped me in that first tie in Switzerland. I had a very good win against Roger and he helped this week. It’s been a gradual thing for me, my coach back home put the majority of my working, but when I came here, Jim kinds of make me ready. Captain Courier is a guy that Iâ€™m very comfortable on the bench, so that helps.â€

Jim Courier: â€œThe quality of todayâ€™s match was exceptional, I thought better even than on Friday. John is definitely continuing to improve even from the last tie. I think he played better this one. It is impressive.”

“Against Spain, we probably lose it on paper but they donâ€™t play them on paper. We have to play it out there and we have players who are capable and passionate and hungry. We are definitely going to be the underdog once again but we will be ready to play.” 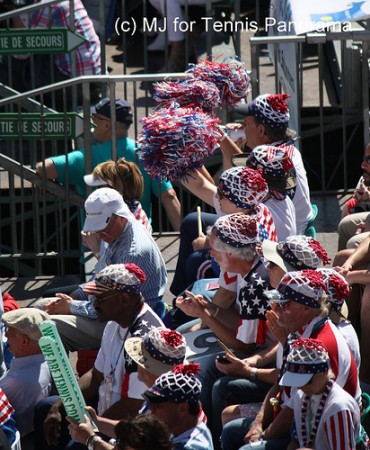 Spotted today at the Monte Carlo Country Club: Novak Djokovic, the World NÂ°1, and his girlfriend curiously at home in Monaco and not in Belgrade to support his teammates against Czech Republic; Ricardo Piatti and Ivan Ljubicic, for the last tournament of Ljubiâ€™s career, next week in Monte Carlo; Eric Winogradsky, former Jo-Wilfried Tsongaâ€™s coach ; Alain Boghossian, former soccer player, World champion in 1998 with the French squad; the little group of the Net Heads, trying to make as much noise as the French crowd; and a bonus, Alexandre Vinokourov, the cyclist champion, training with three Astanaâ€™s teammates on the roads of Monaco.

End of the week in Monaco for Guillaume and MarieJ. Itâ€™s been a pleasure to share with you the coverage of this France / USA tie, in one of the most beautiful places for tennis. We are French, but we were really drawn in by this US team. See you next time and good luck in Spain!

Guillaume Willecoq was at the Monte Carlo Country Club covering the US versus France quarterfinal Davis Cup tie as media for Tennis Panorama News.Â  Guillaume Willecoq also manages and contributes to the French language tennis website http://www.15-lovetennis.com, follow them on twitter on @15lovetennis.