You are here: Home / Contributors / Houston Qualifying Round-up – Haas Out with Knee Injury 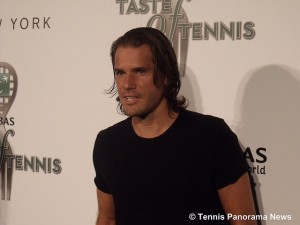 HOUSTON, Texas – Four players had their passports stamped for the main draw as the qualifying competition came to a close today at the US Menâ€™s Clay Court Championships. Go Soeda, the top seed in the qualifying draw and the second highest ranked player from Japan after Kei Nishikori, advanced without picking up his racquet when 2004 Houston champion Tommy Haas pulled out with a right knee injury. Soeda will face his countryman Tatsuma Ito tomorrow in the first round.

Argentinaâ€™s Horacio Zeballos, a semifinalist in Houston two years ago, battled for two hours and 46 minutes to get past Czech veteran Jan Hernych, 6-7, 6-3, 7-5. Ricardo Mello of Brazil overpowered Romaniaâ€™s Catalin-Ionut Gard, 6-3, 6-3. Zeballos will take on another Romanian, Adrian Ungur, in his first main draw match, while Mello will face defending champion Ryan Sweeting.

And 33-year-old Michael Russell defeated a player 13 years his junior, UCLA grad Daniel Kosakowski, 6-4, 6-1, to book his sixth main draw appearance in Houston. Russellâ€™s best career result here was a second round showing in 2007, but he is hoping his local appeal â€“ he and his wife make their home half a mile from the famed Galleria Mall in Houston â€“ will boost his potential to go deeper in the draw.

â€œIâ€™m always more motivated when it comes to the bigger tournaments,â€ said Russell, â€œbut how often do you get to play with your friends and neighbors cheering from the stands?â€ He faces off against Spainâ€™s Daniel Gimeno-Traver on Tuesday.