Milos Raonic gave Roger Federer all he could handle on WednesdayÂ  night at the Madrid Open. The Swiss won a hard fought three-set victory over the Canadian 4-6, 7-5, 7-6(4). This was Federerâ€™s first match since March in Miami when he lost to Andy Roddick in the third round of the Sony Ericsson Open.

The difference in the first set and throughout most of the match was that Raonic was dictating with his serve, knocking 21 aces past his opponent during the match. In the ninth game of the first set, Federer was broken at love and Raonic served it out.

Federer went from playing serve and volley to defending and blocking back Raonicâ€™s powerful serves.Â  “I thought I could take it to him by serving and volleying and it worked a bit,” Federer said. Raonic had a chance to break Federer at 5-5 in the second set but could not convert. Federer held serve and broke Raonic to take the set.

The third set which saw Federer escape a few service game scares went to a tiebreak. Federer was able to get the first minibreak and controlled the tiebreak winning it 7-4

Raonic said in Miami, that he is usually looking forward to playing top players because he knows that itâ€™s important for him to beat them to move to the top of the rankings.

“It was pretty much a big struggle for me tonight but sometimes these kinds of wins can create good things,” said Federer.

Itâ€™s another lesson learned for Raonic. “I felt I played really well the whole time and I was dictating the match especially on my serve,” Raonic told media.

“It just came down to one or two points but if I want to be in this position against Federer, Nadal, Djokovic … I’m going to have to improve my returns.

“It’s hard not to be disappointed but at the end of the day it’s motivating and I know I can get better. With experience, time and a few lucky breaks it will go my way.”

Third seed Federer will face 14th seed Richard Gasquet in the round of 16. 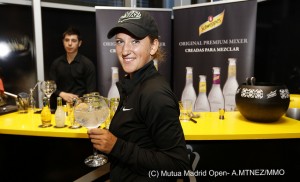 The evening session lead off with a women’s match. No. 1 Victoria Azarenka had an easier time with her opponent dismissing Ana Ivanovic 6-4, 6-4. Ivanovic ran up a 4-1 first set lead on Azarenka only to see the Belarusian storm back by taking the next five games and the set 6-4. Azarenka spoke about the turnaround: â€œI just tried to get into the rhythm of the match. I think she started really strong and I was a little bit too slow and not really aggressive enough but I knew I could turn it around. I just needed to get a small opportunity and that’s it. So I was just tried to stay in the moment and keep applying what wasnâ€™t really working at the beginning. I just tried to do the same thing but execute it better.â€

Azarenka while serving for the match saved break points, and needed four match points to close the contest.

Azarenka, looking for her fifth title of the year will next battle Li Na for a spot in the semifinals.