You are here: Home / Contributors / Roaming in Rome

ROME – The life of the tennis player and the life of the unknown journalist, although lived in the same Foro Italico, can be pretty different. You may be aware of how the athletes spend an average day, let’s try to familiarize you with a journalistâ€™s day around the grounds at the Internazionali BNL d’Italia. 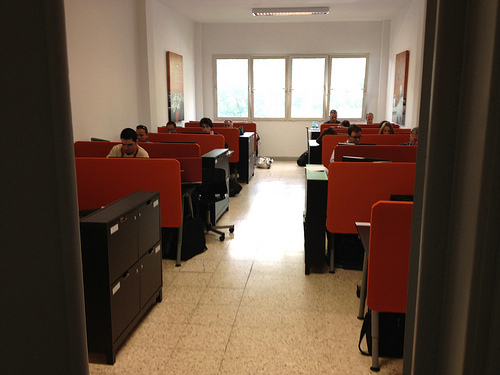 The Rome venue, set in a beautiful city landscape surrounded by a green hill, is long and narrow. The courts are one after the other, mostly in pairs of two, starting from the Centre Court and ending with the SuperTennis Arena. The very first building after the main gate is a former YMCA that this year was transformed in the press area. I said â€˜transformedâ€™ but I should have said â€˜adjustedâ€™ as the main shape still reflects the old building with long corridors and small rooms. Inevitably the press area is divided in four rooms, all alike, impossible to recognize but from a tiny square of different colors on the doors. The common scene is that people rush into a room, stop and stare thinking “who the heck is sitting in my chair?” 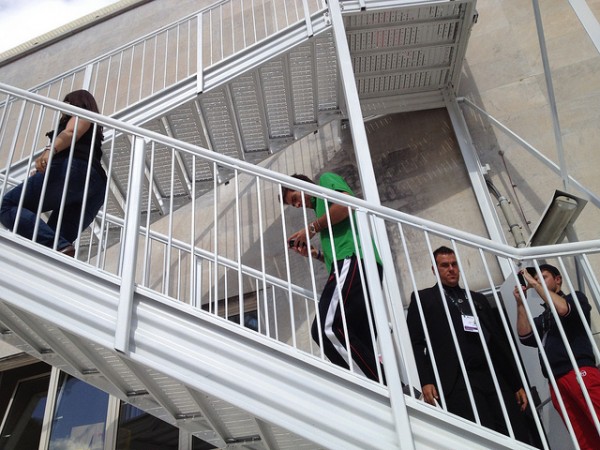 The famous 50 stairs that bring the players to the press conferences are the hourly exercise of every reporter. No one is excused, not even Juan Martin Del Potro. At the bottom of the stairs there is a sort of mini Wimbledon. It’s a small green area that is flooded with water from a sprinkler 24/7. The side effect is that the pavement nearby remains wet all the time and journalists and photographers constantly risk their life.

From the press area to the Centre Court it is a couple of minutesâ€™ walk that lazy spectators may avoid with a little tourist train that covers the path. Behind the main court there is the amazing Pietrangeli court surrounded by the statues. Then you have a restaurant, the last six courts and the SuperTennis Arena. 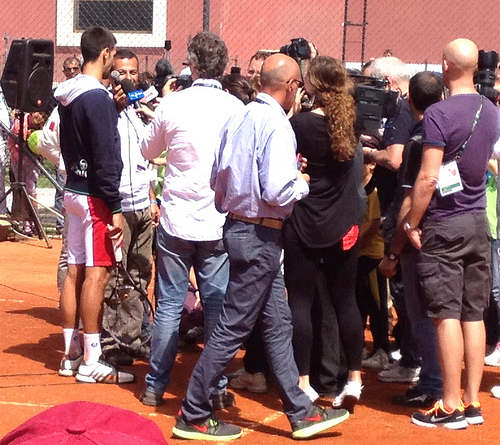 Next to the Arena there is a court dedicated to the kids. The top players show up to entertain them while plenty of coaches let them play. Novak Djokovic popped up today but as you may notice the kids were not those gathering around him. Italian fans want to see the big names. The children are running and screaming in search of Roger Federer and Rafael Nadal and when they realize that their parents don’t have tickets for the main courts get upset. 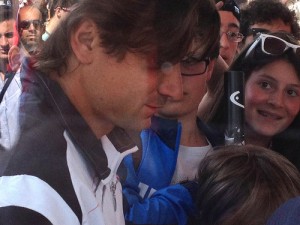 On the way back to the press area there are the sponsor shops. Players are expected every now and then to show up for a round of autographs and the queue for them is usually quite long and loud. Most of the time people don’t even know who they are waiting for but in this case nobody complained about David Ferrer. Also, fans and players have to watch their steps while walking in the Foro Italico: there is a guy painting the champions on the pavement and you would not like to see them stepped on. 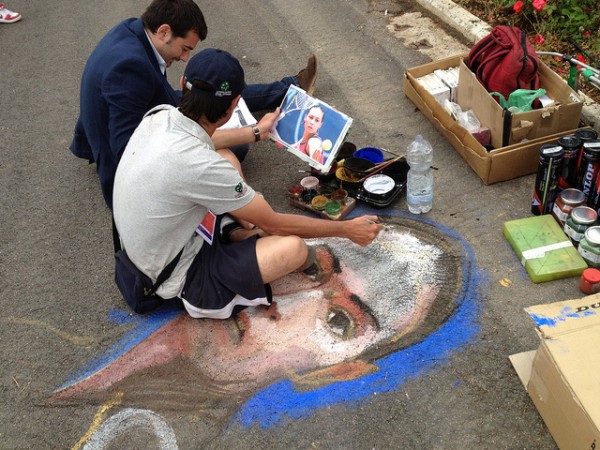 Talking about tennis, Serena Williams had to fight hard to overcome Nadia Petrova, the wind didn’t help but the Russian who is returning to decent form. Ana Ivanovic is set for an interesting match on Thursday with Maria Sharapova while the current Roland Garros champion Li Na had to play in a small and empty court to beat Iveta Benesova. Julia Georges defeated Marion Bartoli, thanks to her seasonal allergy and will play Angelique Kerber in the third round. US Open champion Samantha Stosur went through stopping local heroine Sara Errani. Caroline Wozniacki was forced to retire to Medina Garrigues with an upper respiratory infection.

In the menâ€™s draw, Federer and Nadal main tasks on Wednesday were the adoring fans as both didn’t have to sweat much against Carlos Berlocq and Florian Mayer. Juan Monaco showed good progress in his recovery and will test Djokovic and conditions in the third round. Richard Gasquet gave no chance to Paolo Lorenzi and will meet Andy Murray next while Del Potro, Gilles Simon, Stanislas Wawrinka and Tomas Berdych won. Spaniard Marcel Granollers caused a bit of a shock to the local fans when he beat Fabio Fognini in straight sets. Once again, an epic match for John Isner in which he managed to save 11 consecutive break points before losing the serve and the match to a jubilant Andreas Seppi.

Enrico Maria Riva is in Rome covering the Internazionali BNL D’Italia for Tennis Panorama News. Follow his twitter updates on @TennisNewsTPN and his personal twitter @EnricoMariaRiva.

Enrico Maria RivaÂ is the tennis columnist for the Italian online newspaper Il Post and also writes for the Matchpoint magazine and for the websites Spaziotennis.com and Thetennisspace.com.